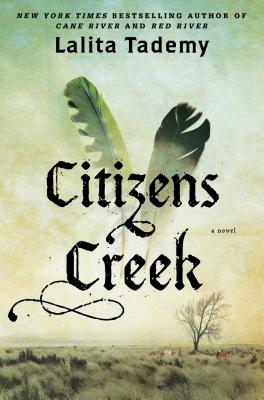 “This stunning historical novel tells the little-known story of Native American-owned black slaves. Central to the story is Rose Simmons, whose grandfather, Cow Tom Simmons, becomes the chief of his displaced Creek Indian tribe. In the territory that will eventually become Oklahoma, Rose fights to maintain her marriage and to adapt to the constant changes dictated by the government. Readers will become immersed in this story of a gritty, determined woman who fights for dignity, respect, and identity during the formative years of our country. This novel is unique, bold, and eye-opening.”
— Nancy Simpson-Brice, The Book Vault, Oskaloosa, IA
View the List

The New York Times bestselling author of the Oprah Book Club Pick Cane River brings us the evocative story of a once-enslaved man who buys his freedom after serving as a translator during the American Indian Wars, and his granddaughter, who sustains his legacy of courage.

Cow Tom, born into slavery in Alabama in 1810 and sold to a Creek Indian chief before his tenth birthday, possessed an extraordinary gift: the ability to master languages. As the new country developed westward, and Indians, settlers, and blacks came into constant contact, Cow Tom became a key translator for his Creek master and was hired out to US military generals. His talent earned him money—but would it also grant him freedom? And what would become of him and his family in the aftermath of the Civil War and the Indian Removal westward?

Cow Tom’s legacy lives on—especially in the courageous spirit of his granddaughter Rose. She rises to leadership of the family as they struggle against political and societal hostility intent on keeping blacks and Indians oppressed. But through it all, her grandfather’s indelible mark of courage inspires her—in mind, in spirit, and in a family legacy that never dies.

Written in two parts portraying the parallel lives of Cow Tom and Rose, Citizens Creek is a beautifully rendered novel that takes the reader deep into a little known chapter of American history. It is a breathtaking tale of identity, community, family—and above all, the power of an individual’s will to make a difference.

Praise For Citizens Creek: A Novel…

"Lalita Tademy brings to the forefront one of the most significant interminglings of people that this country has ever seen. I was completely captured by this family's adventures, misfortunes, and triumphs."
— Dolen Perkins-Valdez, author of Wench

“Lyrical and enchanting, Citizens Creek is a beautifully written novel whose power and scope never fails to reveal the secret bonds that link us all. Tademy conjures up the heroes and heroines of our nation's hidden history, and frees their spirits to tell a tale of love and survival, so vivid, so real, that it feels like magic. The unforgettable characters of Rose and Cow Tom remind us that the American Dream began as a collection of promises—those made and kept, those broken and forgotten—and that our success or failure depends on the promises we make to ourselves.”
— Rashad Harrison, author of Our Man in the Dark

“The marvelous historical novelist Lalita Tademy brings her enormous gifts to the true story of a young slave sold to an Indian chief decades before the Civil War, and the role he would play in setting the course of history. This is a powerful and moving novel about a little known chapter in our past and about one family’s legacy of courage. I’ll remember it for a long time.”
— Ann Packer, author of The Dive From Clausen's Pier

"Lalita Tademy does it again. She takes fascinating moments in history and turns them into powerful, heart-wrenching fiction. The stories of Cow Tom and Rose will wow you, crush you, and stay with you for a very long time."
— Ellen Sussman, author of A Wedding in Provence, The Paradise Guest House, and French Lessons

“Lalita Tademy has done it again—Citizens Creek is a deep, touching novel of great historical import and lyrical beauty. At the heart of this book is a headstrong family living both as free blacks as well as Muscogee-speaking Creek. We learn the history of a people: one in constant battle to protect both their lands and freedoms, their loves and loved ones—and ultimately, the quest for their inheritance and birthright as Americans—in the greatest, truest sense of the word.”
— ZZ Packer, author of Drinking Coffee Elsewhere

Lalita Tademy is the author Cane River, a New York Times bestselling novel and the 2001 Oprah Book Club Summer Selection, and its critically acclaimed sequel Red River. She lives in Northern California.
Loading...
or
Not Currently Available for Direct Purchase