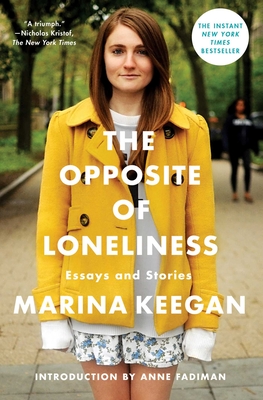 As her family, friends, and classmates, deep in grief, joined to create a memorial service for Marina, her unforgettable last essay for the Yale Daily News, “The Opposite of Loneliness,” went viral, receiving more than 1.4 million hits. She had struck a chord.

Even though she was just twenty-two when she died, Marina left behind a rich, expansive trove of prose that, like her title essay, captures the hope, uncertainty, and possibility of her generation. The Opposite of Loneliness is an assem­blage of Marina’s essays and stories that, like The Last Lecture, articulates the universal struggle that all of us face as we figure out what we aspire to be and how we can harness our talents to make an impact on the world.

Ms. Keegan takes on the meaningful and mundane with wit and grace. Her words alternatively swagger and tiptoe.... Reading this book is both heartbreaking and entertaining."
— The Economist

"In her short life, Keegan exhibited uncanny wisdom for an individual of any age, and a literary talent perhaps even more rare."
— The Huffington Post

"Keegan's short stories are relatable and entertaining while her essays, including some of her op-eds from the Yale Daily News, showcase her work as an already accomplished writer. Young writers everywhere will look to her as an inspiration."
— The Huffington Post

"The ultimate summer read for Gen-Y, by Gen-Y."
— Elite Daily

Marina Keegan (1989-2012) was an award-winning author, journalist, playwright, poet, actress, and activist. Her nonfiction has been published in The New York Times; her fiction has been published on NewYorker.com, and read on NPR’s Selected Shorts; her musical, Independents, was a New York Times Critics’ Pick. Marina’s final essay for The Yale Daily News, “The Opposite of Loneliness,” became an instant global sensation, viewed by more than 1.4 million people from 98 countries. For more information, please visit TheOppositeofLoneliness.com.
Loading...
or
Not Currently Available for Direct Purchase