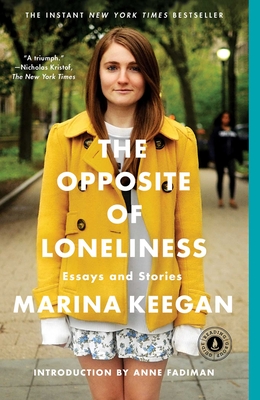 Marina left behind a rich, deeply expansive trove of writing that, like her title essay, captures the hope, uncertainty, and possibility of her generation. Her short story “Cold Pastoral” was published on NewYorker.com. Her essay “Even Artichokes Have Doubts” was excerpted in the Financial Times, and her book was the focus of a Nicholas Kristof column in The New York Times. Millions of her contemporaries have responded to her work on social media.

As Marina wrote: “We can still do anything. We can change our minds. We can start over…We’re so young. We can’t, we MUST not lose this sense of possibility because in the end, it’s all we have.” The Opposite of Loneliness is an unforgettable collection of Marina’s essays and stories that articulates the universal struggle all of us face as we figure out what we aspire to be and how we can harness our talents to impact the world. “How do you mourn the loss of a fiery talent that was barely a tendril before it was snuffed out? Answer: Read this book. A clear-eyed observer of human nature, Keegan could take a clever idea...and make it something beautiful” (People).

"A talented voice, silenced too soon, endures...throughout there are reminders of the talent of this forever-22-year-old."
— The Improper Bostonian

Marina Keegan (1989-2012) was an award-winning author, journalist, playwright, poet, actress, and activist. Her nonfiction has been published in The New York Times; her fiction has been published on NewYorker.com, and read on NPR’s Selected Shorts; her musical, Independents, was a New York Times Critics’ Pick. Marina’s final essay for The Yale Daily News, “The Opposite of Loneliness,” became an instant global sensation, viewed by more than 1.4 million people from 98 countries. For more information, please visit TheOppositeofLoneliness.com.
Loading...
or support indie stores by buying on