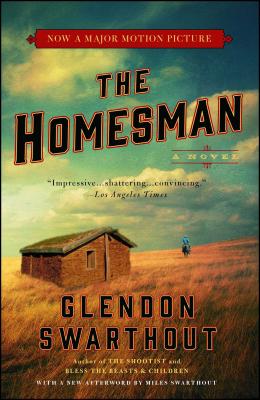 Soon to be a major film directed by and starring Tommy Lee Jones and co-starring Meryl Streep, Hilary Swank, and John Lithgow, this classic Western novel captures the devastating realities of early frontier life through the eyes of one extraordinary woman.

IN PIONEER NEBRASKA, A WOMAN LEADS WHERE NO MAN WILL GO

Soon to be a major motion picture directed by Tommy Lee Jones, The Homesman is a devastating story of early pioneers in 1850s American West. It celebrates the ones we hear nothing of: the brave women whose hearts and minds were broken by a life of bitter hardship. A “homesman” must be found to escort a handful of them back East to a sanitarium. When none of the county’s men steps up, the job falls to Mary Bee Cuddy—ex-teacher, spinster, indomitable and resourceful. Brave as she is, Mary Bee knows she cannot succeed alone. The only companion she can find is the low-life claim jumper George Briggs. Thus begins a trek east, against the tide of colonization, against hardship, Indian attacks, ice storms, and loneliness—a timeless classic told in a series of tough, fast-paced adventures.

In an unprecedented sweep, Glendon Swarthout’s novel won both the Western Writers of America’s Spur Award and the Western Heritage Wrangler Award. A new afterword by the author’s son Miles Swarthout tells of his parents Glendon and Kathryn’s discovery of and research into the lives of the oft-forgotten frontier women who make The Homesman as moving and believable as it is unforgettable.

Praise For The Homesman: A Novel…

"I tell friends what The Homesman is about and their eyes open wide and they can't wait to read it. And that's just the plot. Swarthout puts you there, in time and place. I love the way he writes."
— Elmore Leonard

"Totally involving from its very first words... a dangerous journey into the soul, an exploration of the relationships of men and women to each other, to their environments and—ultimately most devastatingly—to themselves."
— Los Angeles Times Book Review

"One of Swarthout'sb best... An absorbing epic of endurance."
— Kirkus

"No reader should even attempt to guess what happens. Surprise piles upon surprise... Glendon Swarthout has honed writing excellence to a nearly unsurpassable level... A powerful novel... A classic of vivid realism and gripping storytelling."
— Associated Press

"A finely crafted novel... told with smooth economy... re-creates a seamless and sccurate territorial Nebraska... with character so real the reader resents it when one dies."
— Kansas City Star

Glendon Swarthout wrote sixteen novels, many of which were bestsellers and were made into films, among them Seventh Cavalry, They Came to Cordura, Where the Boys Are, Bless the Beasts & Children, and A Christmas to Remember. He was twice nominated for the Pulitzer Prize in fiction and won a number of other awards, including the Western Writers Award for Lifetime Achievement.