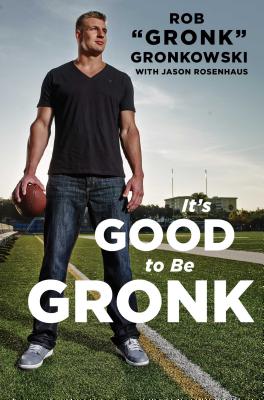 It's Good to Be Gronk

“One of the best tight ends the game has ever seen. Off the field, he’s unabashedly the cruise director of the NFL.” —New York Post

Rob “Gronk” Gronkowski holds nine league-wide records and three Patriots franchise records. His accomplishments include thirty-eight receiving touchdowns in his first three seasons (thirteen more than any other tight end in the NFL) and the 2011 record for most touchdowns made by a tight end, with seventeen receiving and eighteen overall. With a Super Bowl victory under his belt and a nationwide reputation for a personality that’s “comedy gold” (CBS Sports), he has continued to win the hearts of fans through his fun-loving attitude.

From hamming it up at Super Bowl Media Day, to spicing up interviews with “Gronk-esque” dance moves, to cuddling with kittens in the pages of ESPN The Magazine, to christening a used party bus his ride of choice, Gronk’s good humor and playful persona make it seem like other players are “living in black and white, and Gronk is in color” (CBS Sports). But it’s not all fun and games. After multiple surgeries on his forearms, ankle, and back, Gronk tore his ACL and MCL, prematurely ending his 2013 season (but not before scoring four touchdowns and 592 receiving yards). His many injuries and subsequent recoveries made his key play in Super Bowl XLIX—which led to victory and the title of “Comeback Player of the Year”—all the sweeter. Gronk takes fans from the field to the locker room to the VIP room to the talk show green room to his parents’ kitchen table—a full tour of the world according to Gronk.

Rob “Gronk” Gronkowski played college football for the University of Arizona before beginning his legendary career as a tight end for the New England Patriots. Hailed as one of the best tight ends the NFL has ever seen, Gronk is going into his sixth season with 54 touchdowns, over 4,300 receiving yards, nine NFL-wide records, three Patriots franchise records, and millions of fans who can’t get enough Gronk.

Jason Rosenhaus is a sports agent, lawyer, certified public accountant, and writer. He is the coauthor, with Drew Rosenhaus and Don Yaeger, of A Shark Never Sleeps.
or support indie stores by buying on