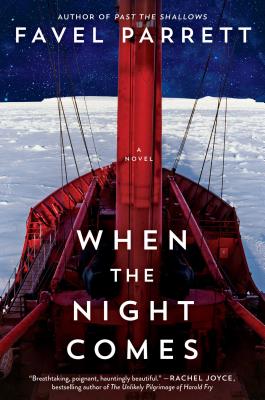 When the Night Comes

Longlisted for the prestigious Miles Franklin Award, this “moving account of the depth of ordinary lives” (Library Journal, starred review) tells of a young Tasmanian girl and a Danish sailor in their search for meaning and whose brief encounter leaves a lasting impact on both.

Isla is a lonely girl who moves to Hobart with her mother and brother to try to better their lives. It’s not really working until they meet Bo, a crewman on an Antarctic supply ship, the Nella Dan, who shares stories about his adventures with them—his travels, bird watching, his home in Denmark, and life on board the ship. Isla is struggling to learn what truly matters and who to trust, while this modern Viking is searching to understand his past and to find a place in this world for himself. Though their time together is short, it is enough to change the course of both their lives.

Praised for writing that is “vivid and distinct” (Library Journal, starred review) and “exquisite in its simplicity and eloquence” (Kirkus Reviews), Favel Parrett delivers a stunningly beautiful novel—“spare but memorable” (Booklist)—about the remarkable and unexpected bond forged between strangers.

Praise For When the Night Comes: A Novel…

Praise for When the Night Comes:

“Parrett's sometimes melancholy, always heartfelt novel is written in clean, straightforward prose that, in its understated way, successfully captures the moments and moods that constitute her spare but memorable story.”

“The skill and insight that earned Parrett’s debut novel, Past the Shallows, critical acclaim have created another moving account of the depth of ordinary lives… A powerful work that is sure to stay with readers long after the last page.”

Praise for Past the Shallows:

"Compulsively readable...the simple, unaffected tone of Parrett's writing makes this a poignant read—but it's the story of how these two emotionally distant brothers help each other that makes the novel so moving."

“[A]n understated and beautifully penned story… Parrett’s writing is exquisite in its simplicity and eloquence, and her narrative is heart-rending. This poignant story resonates.”

"Parrett deservedly received critical claim in Australia for this haunting fiction debut. Her writing is vivid and distinct...Parrett's novel sings with an emotional power that marks her as a writer to watch."

"Vibrant and intensely moving, this story about three boys in thrall to their angry father sucked me instantly into its emotional currents. Favel Parrett has created a novel as lovely, mysterious, powerful and entrancing as the capricious ocean around which her characters’ lives revolve."
— Christina Schwarz

"If you read only one book this year, make sure it's this."

"A finely crafted literary novel that is genuinely moving and full of heart."

"So real, so true—this novel sweeps you away in its tide."
— Robert Drewe

"Parrett's debut marks the addition of a strong voice to the chorus of Australian literature."

"A work by a new master...Parrett's debut is an uncompromising and memorable tale."

Favel Parrett was named Newcomer of the Year in 2012 by the Australian Book Industry Awards (ABIA) for her debut novel, Past the Shallows. She lives in Australia with her partner, David, and her two dogs, Dougal and Bear. Find out more at FavelParrett.com.au.
Loading...
or
Not Currently Available for Direct Purchase