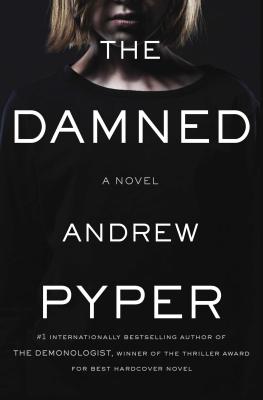 From the #1 internationally bestselling author of The Demonologist, called “smart, thrilling, utterly unnerving” by Gone Girl author Gillian Flynn, comes a spine-tingling supernatural thriller about a survivor of a near-death experience haunted by his beautiful, vindictive twin sister.

Most people who have a near-death experience come back alone…

After he survived a fire that claimed the life of his twin sister, Ashleigh, Danny Orchard wrote a bestselling memoir about going to Heaven and back. But despite the resulting fame and fortune, he’s never been able to enjoy his second chance at life.

In life, Danny’s charming and magnetic twin had been a budding psychopath who privately terrorized her family—and death hasn’t changed her wicked ways. Ash has haunted Danny for twenty years and now, just when he’s met the love of his life and has a chance at real happiness, she wants more than ever to punish him for being alive—so she sets her sights on Danny’s new wife and stepson.

Danny knows what Ash really wants is him, and he’s prepared to sacrifice himself in order to save the ones he loves. But to do this, he'll have to meet his sister where she now resides—and hope that this time, he can keep her there forever.

Praise For The Damned: A Novel…

“Smart, inventive….this is what demons—living or otherwise, human or not—do best: they mesmerize, they seduce, they stop us in our tracks.”—The New York Times Book Review

"An intense and satisfying supernatural story...The novel underlines Pyper's growing reputation as one of the most talented successors to the inimitable Stephen King."
—Daily Mail (UK)

"Pyper is a master architect of dread...Compulsive and nerve-jangling, The Damned is a story about personal hells and the relationships that haunt us."
—Lauren Beukes, author of The Shining Girls and Broken Monsters

"Prepare yourself for a sleepless night or two once you’ve settled in with this smart, suspenseful and absolutely terrifying book that takes the bad seed concept to a whole new level. Pyper has the unique ability to take us to the darkest places and convince us that the things we find there are not only entirely possible and real, but that we might just take some piece of them back with us once we close the cover and turn out the lights."
— Jennifer McMahon, New York Times bestselling author of The Winter People

“It’s an uncommon novel that moves a reader, and a rare one that frightens them, but only the most extraordinary accomplish both at the same time. Enter The Damned, a tour de force that sinks sticky claws into the soft dark places in your psyche—and refuses to let go, no matter how you squirm.”
—Marcus Sakey, author of The Blade Itself and the Brilliance Saga

“Pyper has a knack for imbuing the ordinary with palpable and frighteningly plausible horror. . . . [His] pacing, as well as the novel's length, is perfect, and his evocative description of Detroit, a city desolate in its decline, comes off as both sad and poetic at the same time. A treat for fans of intelligent treatments of the supernatural and rock-solid writing.”
—Kirkus Reviews

“In this literate supernatural thriller . . . as in the best horror, Pyper’s keen eye for the quotidian makes the fantastic feel plausible.”
—Publishers Weekly

“The Damned guarantees many sleepless nights. . . . A novel that will get your heart racing without insulting your intelligence. . . . A supernatural thriller narrated by the author of a popular memoir in the ‘heaven tourism’ genre is a brilliant conceit.”
—The Globe and Mail (Canada)

“As well-written as it is chill-inducing . . . Pyper’s story darkly explores the connection between two siblings that’s forever, but maybe not in the best sense. . . . A masterful conceit.”
—USA Today, 3.5 out of 4 stars

"Frightening, graphic and full of surprises . . . I would put this author right up there with Stephen King." —The Oklahoman

Andrew Pyper is the author of The Only Child, which was an instant national bestseller in Canada. He is also the author of six previous novels, including The Demonologist, which won the International Thriller Writers award for Best Hardcover Novel and was selected for The Globe and Mail’s Best 100 Books of 2013 and Amazon’s 20 Best Books of 2013. The Killing Circle was a New York Times Best Crime Novel of the Year. Four of Pyper’s novels, including The Damned, are in active development for feature film. He lives in Toronto. Visit AndrewPyper.com or @AndrewPyper.
Loading...
or
Not Currently Available for Direct Purchase