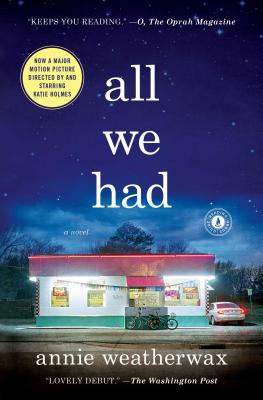 A stirring debut novel about a mother and daughter who find an unlikely home amid the quirky residents of a small town—“The smart style, crisp narrative, sharp dialogue, and vivid descriptions send a powerful message: there is hope hidden in despair” (Publishers Weekly).

For thirteen-year-old Ruthie Carmichael and her mother, Rita, life has never been stable. Though Rita works more than one job, the pair teeters on the edge of poverty.

In their battered Ford Escort, they head east in search of a better life. When money runs out and their car breaks down, they find themselves stranded in a small town called Fat River where Rita finally lands a steady job waitressing at Tiny’s, the local diner. With enough money to pay their bills, they rent a house and make their own family: tender-hearted Mel, the owner of the diner; the aging owners of the local hardware store whose livelihoods are dwindling; and Peter Pam, the transgender waitress who becomes Ruthie’s closest friend.

Into this unlikely utopia comes a smooth-talking mortgage broker who entices Rita with a subprime loan. Almost as soon as Rita buys a house their fortunes change. Faced once again with the prospect of homelessness, Rita reverts to survival mode, and the price she pays to keep them out of poverty changes their lives forever.

Annie Weatherwax has written a stunning, heartrending first novel. “A vivid journey into the dark side of the American Dream...that alternates between black comedy and heart-breaking realism...All We Had is an enjoyable read that takes an important look at economic insecurity” (Providence Journal).

Praise For All We Had: A Novel…

“A fresh voice that sculpts with words in a way that's as beautiful as it is brutal. I love this story and the hands that crafted it.”
— Patricia Cornwell

"A vivid journey into the dark side of the American Dream... alternates between black comedy and heart-breaking realism... an enjoyable read that takes an important look at economic insecurity."
— Betty J. Cotter

Annie Weatherwax was the 2009 winner of the Robert Olen Butler Prize for Fiction and her writing has appeared in The New York Times, The Southern Review, and elsewhere. A graduate of Rhode Island School of Design, for years she earned a living sculpting superheroes and cartoon characters for Nickelodeon, DC Comics, Pixar, and others. She is currently a full time painter and writer. All We Had is her first novel. Learn more at AnnieWeatherwax.com.
Loading...
or support indie stores by buying on