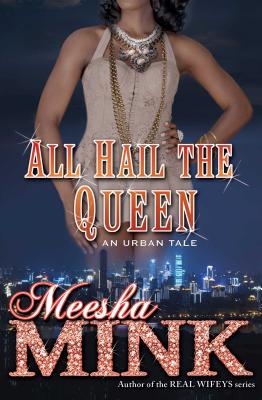 All Hail the Queen

In this heart-pounding sequel to the explosive novel Kiss the Ring, Naeema "Queen" Cole races against the clock to figure out who attacked her man and why--before it's too late. Life finally seems to have calmed down for Naeema "Queen" Cole. After she brought down the Make Money Crew, Newark's most notorious bank robbing gang, she was able to make peace with the son she never knew. His memory is even starting to feel like a blessing, rather than a curse. She and her on-again off-again husband Tank are back on and stronger than ever. But just when she thought she could put away her undercover identity as "Queen" and just be Naeema, Tank is attacked while out on a job guarding a high-profile celebrity. Everyone thinks it was the celebrity who the target, but Naeema knows the attack was personal. With Tank in critical condition and everyone else looking in all the wrong places, it's up to her to find out which of Tank's enemies would dare to mess with her man. Hailed for her "fast-paced action, sizzling erotic sex, and a heartwarming kick-ass heroine," (Publishers Weekly), Meesha Mink is back with another thrilling tale following Naeema on the hunt for a killer, because she'll die before she lets anyone take away her king.

Meesha Mink is the bestselling and award-winning author of more than thirty books written under three names, including the Real Wifeys series and co-authoring the explosive Hoodwives trilogy. She was born and raised in Newark, New Jersey, and lives in South Carolina.
Loading...
or
Not Currently Available for Direct Purchase