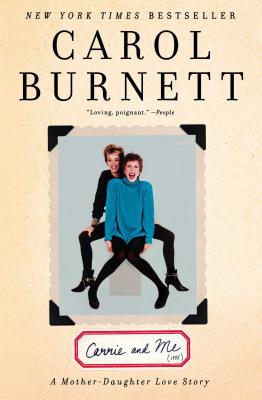 The daughter of one of television’s most recognizable and beloved stars, Carol Burnett, Carrie Hamilton won the hearts of everyone she met with her kindness, her quirky humor, and her unconventional approach to life. After overcoming her painful and public teenage struggle with drug addiction in a time when personal troubles were kept private, Carrie lived her adult life of sobriety to the fullest, achieving happiness and success as an actress, writer, musician, and director before losing a hard-fought battle with cancer at age thirty-eight. Now Carol Burnett shares her personal diary entries, photographs, and correspondence as she traces the journey she and Carrie took through some of life’s toughest challenges and sweetest miracles. Authentic, intimate, and full of love, Carrie and Me is a funny and moving memoir about mothering an extraordinary young woman through the struggles and triumphs of her life.

Praise For Carrie and Me: A Mother-Daughter Love Story…

"A poignant and, of course, funny look at a life cut too short."
— New York Post

"The worst thing for a parent is to outlive a child. The bravest thing a parent can do is to write a loving, funny memoir of her daughter who overcame teenage problems with drugs and living in a superstar parent's shadow to forge her own showbiz career before dying of cancer at 38."
— Atlanta Journal-Constitution

"Carrie and Me is certainly a memorial, but it's more a celebration of [Carrie Hamilton's] life than a somber elegy . . . Affecting."
— Tampa Bay Times

"With humor and poignancy, the celebrated comedian remembers her vivacious and sometimes troubled daughter."
— Sacramento Bee

“In a beautiful and poignant tribute to her late daughter, Carrie Hamilton, actress and comedienne Carol Burnett has written a funny and moving memoir about mothering an extraordinary young woman.”
— Life After 50

“‘Carrie and Me’ serves as an inspirational piece that can aid any parent struggling with raising or losing a child.”
— Examiner.com

“Full of touching, funny stories that are all the more enjoyable for reflecting the author’s sensibility and voice.”
— AVClub.com

“Burnett's touching tribute to her daughter is an opportunity to read a talented and celebrated comedian being serious about a tragic life story.”
— Splitsider.com

“A highly recommended mother’s tribute that will bring tears to most readers’ eyes.”
— Library Journal

“It’s hard to put into words just how deeply this book touched me. It made me laugh, cry and everything in between. Simply wonderful. A beautiful tribute to a remarkable daughter written straight from the heart by the mother who loved her. If you have ever loved a child, read this book. Heartbreakingly funny, sad and wise. Both mother and daughter will live in your heart long after you finish reading.”
— Fannie Flagg

“Through her openness and honesty, Carol Burnett is an inspiration. While reading Carrie and Me, I’d think, How can a person who gave the world so much pleasure have had to endure so much pain? No, life isn’t fair, but in Burnett’s wonderful book we are reminded of what gets us through: love.”
— David Sheff

Carol Burnett is a highly acclaimed actress known for her roles on stage and screen, most notably The Carol Burnett Show. She has been honored with twelve People’s Choice Awards, eight Golden Globes, six Emmy Awards, The Kennedy Center Honors, and the Mark Twain Prize for Humor.
Loading...
or support indie stores by buying on