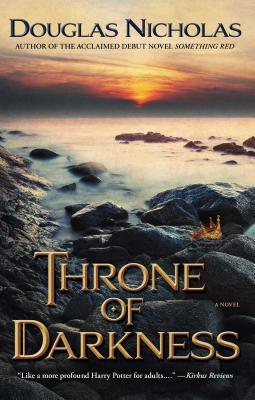 Perfect for fans of Game of Thrones, this novel from acclaimed author Douglas Nicholas continues the gripping dark fantasy series that Kirkus Reviews describes as “a more profound Harry Potter for adults.”

It’s 1215 in northwest England—the eve of the signing of the Magna Carta—and mystical Irish queen Maeve and her unlikely band of warriors must protect the region from a chilling fate. Word of a threat reaches the Northern barons: King John has plotted to import an African sorcerer and his sinister clan of blacksmiths, whose unearthly powers may spell destruction for the entire kingdom. Along with her lover, Jack, her gifted niece, Nemain, and Nemain’s newlywed husband, Hob (whose hidden talents will soon be revealed), Maeve must overcome a supernatural threat unlike any she’s seen before.

With his characteristic blend of historical adventure and intoxicating mythological elements, Nicholas once again “goes for the throat…with brilliant writing and whip-smart plotting” (New York Times bestselling author Jonathan Maberry). This is a richly woven tale that will leave you hungry for more.

Douglas Nicholas is an award-winning poet, whose work has appeared in numerous poetry journals, and the author of four previous books, including Something Red and Iron Rose, a collection of poems inspired by New York City. He lives in New York’s Hudson Valley with his wife Theresa and Yorkshire terrier Tristan.

Praise For Throne of Darkness: A Novel…

"A darkly evocative tale that transports the reader back to 13th century England--withall the strife and blood-shed that entails. The unique combination of ancient Irish magic and eerie horror will keep readers rapidly turning pages late into the night. Utterly engrossing."
— Jessica Leake, author of Arcana


“The poetic nature of the language, the increasing of the novel’s atmospheric spook and the members of the traveling family made Something Red a winner.”
— MindingSpot

“Douglas Nicholas has written a gut-wrenching, harrowing novel in Something Red; however, he’s also written a touching, realistic story about what made a family, love, and life during a 13th century English winter . . . Nicholas’ storytelling painted this novel with historic realism that made it pop right off the page. . . If you like a non-stop thrilling roller coaster ride, hop on board with Something Red!”
— Popcorn Reads

“The most stunning debut novel I have ever read. The language is beautiful and descriptive; the novel is an incredible sensory experience for the reader.”
— Examiner.com

“Nicholas handles characterization, setting and atmosphere deftly and expertly . . . Something Red is an excellent debut from a gifted author.”
— Shelf Awareness

“This darkly atmospheric debut novel is well worth its measured plot-building for its horrific, unexpected ending.”
— Library Journal (starred review)

Throne of Darkness is a satisfying adventure that successfullyblends history and fantasy. I very much enjoyed reading it, which is notsomething I can say about many books these days.
— Lawrence Watt-Evans, author of The Obsidian Chronicles and The Legends of Ethshar series

"This series keeps getting better and better. THRONE OF DARKNESS finds Hob and his comrades facing terrifying threat as they continue on their quest to reinstate Maeve and Nemain to rightful places as queens of Ireland. Nicholas weaves a web as potent as any of Queen Maeve's to transport us to 13th Century Britain. This is by far my favorite medieval historical series!"
— Carol Goodman, bestselling author of THE BLYTHEWOOD TALES and THE LAKE OF DEAD LANGUAGES

"THRONE OF DARKNESS takes you directly to thirteenth-centuryEngland and sticks you there until the story is done with you. The sights, sounds, smells and tastes of theperiod – and the people who inhabit it -- are brought vividly to life. Too often books with an historical basis havea bit of period window dressing and characters that feel as if they are on loanfrom a Renaissance Faire – people with an essentially modern way ofunderstanding the world, place holders for the reader. What Nicholas gives us is the Middle Ages inall of its fantastic weirdness and characters that belong there, serving astory that’s well worth reading."
— Greg Keyes, New York Times bestselling author of the KINGDOMS OF THORN AND BONE series

"A metropolitan collection of fascinating historical fiction...ever more complex with its liberal dose of magic and mysticism."
— Booklist

meticulous detailing of the early 13th-century setting is only one of the pleasures of this series (after Something Red and The Wicked) that mixes historical fiction and horror. Mostly told from the point of view of Hob, the narrative gives readers the added pleasure of his continuing evolution from gangly young man to husband and now knighted warrior.
— Library Journal

The meticulous detailing of the early 13th-century setting is only one of the pleasures of this series (after Something Red and The Wicked) that mixes historical fiction and horror.
— Library Journal

“Nicholas’s background as a poet lends the prose richness, with lyrical descriptions of the English countryside that do not slow the suspense one bit.”
— Historical Novel Society

“[With] a glorious mix of magic, history and mythology, Nicholas has created a winning series. I cannot wait for the next entry.”
— The Nameless Zine
or
Not Currently Available for Direct Purchase
Copyright © 2020 American Booksellers Association