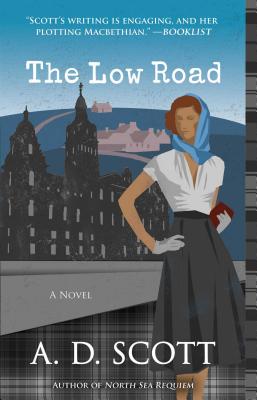 A. D. Scott’s extraordinary mystery novels have been called “beautifully written and atmospheric” (New York Times bestselling author Rhys Bowen), “a visit with an old friend in front of a fireplace” (Suspense Magazine), and “must-reads” (Booklist).

John McAllister has come to a crossroads, torn between the stability of his life in the Highlands and the thrill of working as a renowned journalist in Glasgow at a national daily newspaper. Can he accept that this exciting new phase is over? That it is time to settle down?

Before he knows it, McAllister is in the midst of a fast-paced hunt for his good friend Jimmy McPhee, who is involved in a blood feud with a murderous razor gang. With a fiercely ambitious young crime reporter, he tracks down Jimmy, but the gang finds them. Only when another violent clash breaks out do they have the chance to escape. Soon McAllister finds himself in danger of losing everything he holds dear—his mother, his fiancée, his friends, his integrity, and his life.

And Joanne Ross, recovering from horrific injuries, senses McAllister’s ambivalence about their forthcoming marriage, and she knows she can only wait for him to return to her.

From the wilderness of the Highlands to the desolation of Glasgow’s slums, book five in Scott’s mystery series is a portrait of extremes: between city and glen; between the rule of law and the laws of the streets; between safe, enduring love and unreasoning passion.

Praise For The Low Road: A Novel (The Highland Gazette Mystery Series #5)…

"An atmospheric mystery, with a wonderful, plucky reporter-heroine."
— Booklist

PRAISE FOR BENEATH THE ABBEY WALL:

"Beautifully written and atmospheric, Beneath the Abbey Wall transports the reader to the bleakness of Scotland after World War II. This has everything I enjoy in a book: a terrific sense of place, real people, complicated relationships and a suspenseful peeling away of layers of back-story.”
— Rhys Bowen, New York Times bestselling author of Hush Now, Don't You Cry

"Scott vividly evokes Scotland of the period…The well-drawn characters, who come from a range of backgrounds, give a broad view of the social milieu.”
— Publisher's Weekly

“A plot that’s ingenious, characters that are both believable and surprising, and evocative Highlands atmosphere make this another must-read.”
— Booklist (starred)

PRAISE FOR A DOUBLE DEATH ON THE BLACK ISLE:

"Set against the bleak beauty of the Highlands, Scott's second continues to explore the slow transformation of Scotland from a highly ordered society while presenting a fine mystery with engaging characters."
— Kirkus Reviews (starred)

"Another stunner...Lots of action, lots of atmosphere, and above all, lots of fun."
— Booklist (starred)

“Readers…should enjoy Scott's careful attention to creating characters who convincingly belong to a past era's attitudes and values.”

“'A Double Death on the Black Isle' is like a visit with an old friend in front of a fireplace on cold wintry night. It’s a place you won’t want to leave.”
— Suspense Magazine

“Filled with alliteration and atmosphere…he end result is worth sticking around for and readers will be left anticipating the next installment.”
— Bookpage

“As patrician and working classes prepare to do battle, Scott’s well-written mystery is lyrical and arresting, Joanne persevering in spite of the obstacles of the time."
— Curledup.com (blog)

"...a searing psychological portrait of a man at a crossroads...delivers suspense, fascinating details about postwar Scotland, and vivid portrayals of both back alley and glen."
— Booklist (starred)

"Scott incisively sets the middle-aged hero’s struggle to come to terms with his life against the violence of a decaying city and the clean beauty of the Highlands."
— Kirkus

A.D. Scott was born in the Highlands of Scotland and educated at Inverness Royal Academy and the Royal Scottish Academy of Music and Drama. She has worked in theater and in magazines, and is currently writing the next book in the acclaimed Highland Gazette mystery series.
Loading...
or
Not Currently Available for Direct Purchase