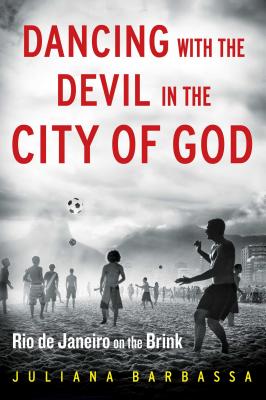 Dancing with the Devil in the City of God

Rio de Janeiro on the Brink

“Rio de Janeiro is one of the world's most exotic cities and much in the news over the past few years, hosting both the World Cup in 2014 and the upcoming 2016 Olympics. Journalist and Brazilian native Barbassa presents a complex portrait of a city, country, and society attempting to present the best possible face to the world while having to confront numerous problems, particularly a level of crime that is almost beyond belief. Barbassa's description of this massive change being attempted from on high and the resulting disruption to an entrenched society is informative, instructive, and mesmerizing as she strips bare the glitter and glitz of the famous beaches and gives us a revealing portrait of the true Rio.”
— Bill Cusumano (M), Square Books, Oxford, MS
View the List

In the tradition of Detroit: An American Autopsy and Maximum City comes a deeply reported and beautifully written biography of the seductive and chaotic city of Rio de Janeiro from prizewinning journalist and Brazilian native Juliana Barbassa.

Juliana Barbassa moved a great deal throughout her life, but Rio was always home. After twenty-one years abroad, she returned to find the city that once ravaged by inflation, drug wars, corrupt leaders, and dying neighborhoods was now on the precipice of a major change.

Rio has always aspired to the pantheon of global capitals, and under the spotlight of the 2014 World Cup and the 2016 Olympic Games it seems that its moment has come. But in order to prepare itself for the world stage, Rio must vanquish the entrenched problems that Barbassa recalls from her childhood. Turning this beautiful but deeply flawed place into a predictable, pristine showcase of the best that Brazil has to offer in just a few years is a tall order—and with the whole world watching, the stakes couldn’t be higher.

With a cast of larger-than-life characters who are driving this fast-moving juggernaut or who risk getting caught in its gears, this kaleidoscopic portrait of Rio introduces the reader to the people who make up this city of extremes, revealing their aspirations and their grit, their violence, their hungers and their splendor, and shedding light on the future of this city they are building together.

Dancing with the Devil in the City of God is an insider perspective into a city on the brink from a native daughter whose life, hopes, and fortunes are entwined with those of the city she portrays.

Praise For Dancing with the Devil in the City of God: Rio de Janeiro on the Brink…

“In a book that’s akin to Charlie LeDuff’s Detriot, Barbassa combines history and personal interviews in an informative and engaging work, showing a nation whose people desire a better country but are at odds with the government and even themselves at the best way to achieve that result.”
— Library Journal

Returning to Rioafter years abroad, Juliana Barbassa takes the reader on a journey of urbanexploration beyond the tourist clichés of Ipanema and Carnival. Her book, Dancingwith the Devil in the City of God, seamlessly melds deep reporting withnuanced memoir, providing an insider’s guide to a global city of immenseenergy, appetites, heartbreak and danger. To understand Rio’s prospects for the21st century, come with Barbassa on her voyage of inquiry andrediscovery. It’s a trip worth taking. I savored every moment.
— Ambassador Derek Shearer, Director of the McKinnon Center for Global Affairs, Occidental College, Los Angeles

Juliana Barbassa haswritten a beautiful yet unflinching meditation on one of the world's greatcities during a moment of profound change. Her book is a moving examination ofthe immense charms, staccato violence and unfulfilled promise of the marvelouscity and of the heart of modern Brazil.
— Michael Deibert, author of In the Shadow of Saint Death: The Gulf Cartel and the Price of America's Drug War in Mexico

A timelytour-de-force…Drawing on the city’s history, geography, social structure,culture, political intrigues, and economic disparities, Barbassa has written amultidisciplinary masterpiece. This splendid and accessible narrative is mustreading not just for the journalists, spectators, and athletes who will be inRio for the Olympic Games, but for anyone who has visited Rio – or not – andhas been caught up in the magnetic attraction of this spectacular andcomplicated city.
— Dr. Robert Maguire, Director of the Brazil Initiative at the Elliot School of International Affairs, George Washington University

Ibecame unexpectedly choked up not once but twice in the introduction alone andfound myself sucked into the most in-depth, personal and thorough unfolding ofBrazil’s history on the brink of its economic rebirth. Whether as ananticipatory read before Brazil hosts the Olympics in 2016 or to better grasp acountry so rich, complex and divided by extreme dualities of lifestyles, thisis a book that you will be unable to set down. Juliana Barbassa brings usboth a journalistic and introspective vantage point of a country in the midstof a metamorphose with the unique angle of a native born Brazilian returninghome forever a foreigner after living abroad for much of her life with awell-worn passport. Contemporarily relevant, uniquely compelling, exquisitelywritten and brilliantly delivered, I anticipate many readers, like myself, willfind our passport soon bearing the stamp of Brazil thanks to Barbassa.
— Jesica Sweedler DeHart, BookPeople of Moscow (Moscow, Idaho)

Riode Janeiro is one of the world's most exotic cities and much in the news overthe past few years with the World Cup in 2014 and the Olympics upcoming in2016. Journalist and Brazilian native Juliana Barbassa presents a complexportrait of a city, country and society attempting to present the best possibleface to the world while having to confront numerous problems in its ownsociety, particularly a criminal level that is almost beyond belief. Herdescription of this massive change being attempted from on high and thedisruption to an entrenched society is informative, instructive and mesmerizingas she strips bare the glitter and glitz of the beaches and gives us the trueRio.
— Bill Cusumano, Square Books (Oxford, MS)

IsBrazil ready to take its place as the 6th largest world economy andis Rio ready to host the 2016 summer Olympics? Will the monumentalsocial and political changes currently underway last beyond the final medalceremony? Barbassa's well written and informative expose is a fascinatinglook at Rio’s history and attempts to transform itself into a safe, democraticand ultimately modern city.”
— Phyllis Spinale, Wellesley Books

“In Julia Barbassa's fascinating new book, easy assumptions are peeled back to expose a place struggling to define its present and its future. . . . [S]he is both a knowledgable insider and a fiercely critical outsider. . . . Brazil is indeed on the brink, on a precipice ready to soar or fall, or perhaps, as Barbassa suggests, fated to remain forever poised, waiting for liftoff.”
— Lourdes Garcia-Navarro, NPR News

Juliana Barbassa was born in Brazil, but she had a nomadic life between her home country and Iraq, Malta, Libya, Spain, France, and the United States before settling in Switzerland. Barbassa began her career with the Dallas Observer, where she won a Katie Journalism Award in 1999. She joined the Associated Press in 2003, and after two more awards from the National Association of Hispanic Journalists and the APME, she returned to Brazil in 2010 as the AP’s Rio de Janeiro correspondent. Dancing with the Devil in the City of God is her first book.
Loading...
or
Not Currently Available for Direct Purchase