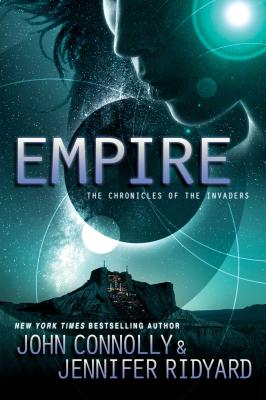 The Chronicles of the Invaders

Empire continues the journey of Syl and Paul as they fight to regain planet Earth from a ruthless alien species, in this next installment of a stunning new science fiction trilogy that “should not to be missed” (The Guardian).

She is the trophy of a civilization at war with itself.

He is its rebel captive.

Separated by millions of light years, they will fight to be united…

Earth has been conquered and occupied. The war is lost.

The Resistance still fights the invaders, but they are nothing more than an annoyance to the Illyri, an alien race of superior technology and military strength.

When caught, the young rebels are conscripted. Part soldiers, part hostages, they join the Brigades, sent to fight at the edges of the growing Illyri Empire.

Paul Kerr is one such soldier—torn from his home and his beloved Syl Hellais. She is the first alien child born on Earth, a creature of two worlds—and a being possessed of powers beyond imagining. Now both must endure the terrible exile that Syl’s race has deemed just punishment for their love.

But the conquest of Earth is not all it seems.

There is another species involved, known only as the Others, and the Illyri will kill to keep their existence secret.

Light years from Earth and millions of miles apart, Paul and Syl must find a way to reveal the horrifying truth behind the Empire, and save all that they hold dear from the hunger of the Others.

Even at the cost of their own lives…

Jennifer Ridyard was born in England and grew up in South Africa, where she worked as a journalist for many years. Conquest and Empire are the first two novels in the Chronicles of the Invaders series with her partner, John Connolly, who she lives with in Dublin. Find Jennifer on Twitter @JennieRidyard. For more about this series, visit ChroniclesOfTheInvaders.com.

Praise For Empire: The Chronicles of the Invaders…

"Densely plotted and decidedly grown-up, this is YA fiction for readers who are bored of fluff and sparkles."
— SFX Magazine (UK)

“The other books in the promised trilogy are going to be well worth the wait.”
— Florida Times Union

“I love science fiction, I love solid, real characters, I love adventure, and I love to be continually surprised. Conquest has all of this and more. Feeling fresh from beginning to end, and written with a torrential, captivating pace, I highly recommend this book!"
— James Dashner, NYT bestselling author of THE MAZE RUNNER

"A striking novel, devoid of the usual Young Adult conventions and far better for it: from the choice of location to the complex and involving plot that defies the expectations of its target market, this is a novel that does not fear to take the reader to darker places than others of its ilk. The strong characterisation of Steven, Peter and our heroine Syl make their extraordinary adventure all the more believable, and bring an often imagined future for humanity very much to life. A brilliant beginning to what will no doubt become an epic series."
— Dean Crawford, author of COVENANT and IMMORTAL

“Connolly and Ridyard have more than successfully set the stage for what promises to be a great new series!”
— My Bookish Ways

“…I couldn’t put the book down, I was so invested in the characters and what was happening. It’s a great start to a series.”
— Sci-Fi Fan Letter

"This novel is entertaining and addictive science fiction!”
— RisingShadows.net

“Conquest is over-flowing with originality, adventure and damn fine writing – fans and newcomers alike should be clamoring for it.”
— BOLO Books

“Wormholes enable the story-line to move in fascinating directions with characters that continue to develop as new ones are added. Really, a fantastic and entertaining read.”
— Koeur's Book Reviews

“Even faster paced than the first volume…this series is improving as it goes along.”
— Library Journal

"Read the book. Strongly recommended for you and your offspring."
— BookReporter