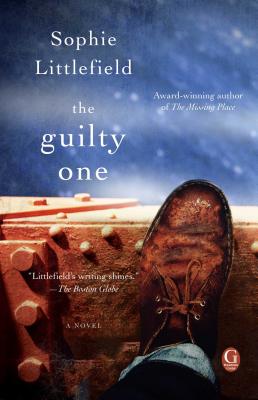 From the award-winning author of The Missing Place—in which “Littlefield’s writing shines" (The Boston Globe)—another gripping exploration of the damage people can do to each other, and the resilience they find in themselves.

A man stands on the Golden Gate Bridge, poised to jump…if a woman on the other end of the phone tells him to.

Maris’s safe suburban world was shattered the day her daughter was found murdered, presumably at the hands of the young woman’s boyfriend. Her marriage crumbling, her routine shattered, Maris walks away from her pampered life as a Bay Area mom the day she receives a call from Ron, father of her daughter’s killer. Wracked with guilt over his son’s actions (and his own possible contribution to them), he asks Maris a single question: should he jump?

With a man’s life in her hands, Maris must decide, perhaps for the first time, what she truly wants. Retribution? Forgiveness? Or something more? Having lost everything, she’s finally free to recreate herself without the confining labels of “wife,” “mother,” or “mourner.” But will this shocking offer free her, or destroy her?

Praise For The Guilty One…

“Littlefield maximizes the emotional impact of her character-driven cautionary tale.”
— --Publishers Weekly on The Missing Place

"Littlefield has a unique voice that will stay in your head long after you've finished this treasure of a book.”
— —Tim Maleeny, award-winning author of Stealing The Dragon

"Littlefield has a gift for pacing.”
— --Publishers Weekly, starred review

"Littlefield shows considerable skills for delving into the depths of her characters and complex plotting as she disarms the reader."
— –South Florida Sun-Sentinel

"Another entertaining read."
— Library Journal on THE GUILTY ONE

"Littlefield excels at exampining the small minutiae that add up to major decisions...[an] intricate, touching story of how these characters pick up the pieces."
— RT Book Reviews on THE GUILTY ONE

“All through this novel, there is never a place where the reader won’t think these people are absolutely real. They will also feel a profound sense of loss when the tale is over. An emotional journey that is definitely worth the time.”
— --Suspense Magazine

Sophie Littlefield grew up in rural Missouri, the middle child of a professor and an artist. She has been writing stories since childhood. After taking a hiatus to raise her children, she sold her first book in 2008, and has since authored over a dozen novels in several genres. Sophie’s novels have won Anthony and RT Book Awards and been shortlisted for Edgar, Barry, Crimespree, Macavity, and Goodreads Choice Awards. In addition to women’s fiction, she writes the post-apocalyptic Aftertime series, the Stella Hardesty and Joe Bashir crime series, and thrillers for young adults. She is a past president of the San Francisco Romance Writers of America chapter. Sophie makes her home in northern California.
Loading...
or
Not Currently Available for Direct Purchase