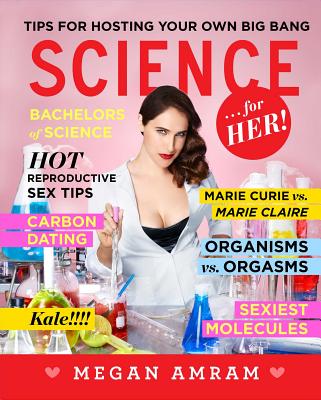 Megan Amram, one of Forbes’ “30 Under 30 in Hollywood & Entertainment,” Rolling Stone’s “25 Funniest People on Twitter,” and a writer for NBC’s hit show Parks and Recreation, delivers a politically, scientifically, and anatomically incorrect “textbook” that will have women screaming with laughter, and men dying to know what the noise is about.

In the vein of faux expert books by John Hodgman and Amy Sedaris, Science…for Her! is ostensibly a book of science written by a denizen of women’s magazines. Comedy writer and Twitter sensation Megan Amram showcases her fiendish wit with a pitch-perfect attack on everything from those insanely perky tips for self-improvement to our bizarre shopaholic dating culture to the socially mandated pursuit of mind-blowing sex to the cringe-worthy secret codes of food and body issues.

Part hilarious farce, part biting gender commentary, Amram blends Cosmo and science to highlight absurdities with a machine-gun of laugh-inducing lines that leave nothing and no one unscathed. Subjects include: this Spring’s ten most glamorous ways to die; tips for hosting your own big bang; what religion is right for your body type; and the most pressing issue facing women today: kale!!!

Be prepared to laugh about anything in this outrageous satirical gem.

“Science…for Her! taught me so much. I learned fun ways to freeze my eggs. I learned the best religion for my body type. I learned the whole world is going straight to hell.”
— Amy Poehler, author of "Yes Please"

“I may be but a man, but Dr. Amram’s book has cottoned me to numerous new scientific hypotheses that are both fun and flirty.”
— Nick Offerman, author "Paddle Your Own Canoe"

“This book was fun AND informative, and just the right size for my tiny lady hands! Most books cause my hands to bruise and chafe!”—Ellen Page
— Ellen Page

“It’s perfect, dada-as-hell, comedy-as-borderline art. True story: reading this book on the subway, I cackled and chuckled and laughed so hard that people gave me looks. There is also a two-page centerfold that reads KALE!!!!! in gorgeous lettering.”

"Comedian Amram brings her absurd brand of humor to a satirical take on science lessons 'tailored for the female brain'. . . An incisive parody. . . Amram hits the funny bone in all the right spots."

"Hilarious...An absurd blend of science with beauty and dating tips."

"A hilarious feminist manifesto for the modern era."

"Will make you laugh out loud. [Amram] also delivers a legitimate critique of sexism—with frequent detours into the absurd.”

"Why can’t women drive? Which religion is right for your body type? And what’s the deal with kale? Parks and Recreation writer Amram answers these and other very scientific questions in this satirical textbook-cum-women’s magazine. While it’s “tailored to you, ladies,” Science is a triumph that anybody with a sense of humor will appreciate."

"An exuberantly scathing takedown of the sexism lurking within the fun, flirty pages of women’s magazines...laugh-out-loud funny."

Megan Amram is a writer for the NBC comedy Parks and Recreation. A 2002 Harvard graduate, she has amassed nearly 400,000 Twitter followers who enjoy her hilarious brand of off-beat humor. Her writing has appeared in McSweeney’s, Vulture, and The Awl, among others. Her viral video “Birth Control on the Bottom” prompted Jezebel to call her a “national treasure.” She lives in Los Angeles.
Loading...
or
Not Currently Available for Direct Purchase