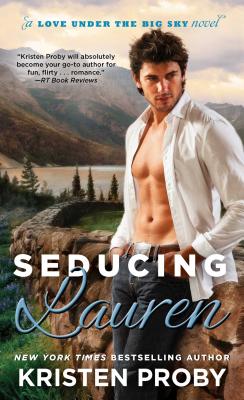 In the second book in the Love Under the Big Sky series from th New York Times and USA TODAY bestselling author of the With Me in Seattle series, life in Montana gets spicy when a woman and her divorce lawyer sign off the papers—and sign on to love.

Now that his best friend, Josh, has happily settled down with his true love on a Montana ranch, small-town lawyer Ty Sullivan starts thinking that maybe single life isn’t all it’s cracked up to be. And when Lauren Cunningham’s no-good ex-husband comes after her for an unexpected trust fund, Ty steps in to protect her. But soon he can’t help but think of her as more than a client. Lauren’s in no mood to jump into another relationship, so how can Ty convince her that her mistake wasn’t getting married, but marrying the wrong guy?

Praise For Seducing Lauren (Love Under the Big Sky #2)…

"Sizzling...Kristen Proby’s enthralling novel is filled to the brim with one hardworking family’s triumphs and challenges, all the wild adventure of the modern West, and a whole lot of titillating fun."
— Bookreporter.com

“The debut of Proby’s Love Under the Big Sky series is a searing, multilayered and utterly charming novel that is sure to win a number of new fans for her growing legions.”
— RT

Kristen Proby is the New York Times bestselling author of the Love Under the Big Sky trilogy and the self-published With Me in Seattle and Boudreaux series. She lives in the Pacific Northwest.
Loading...
or
Not Currently Available for Direct Purchase