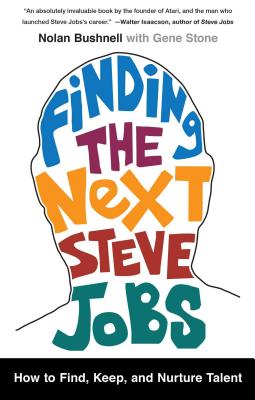 Finding the Next Steve Jobs

How to Find, Keep, and Nurture Talent

From the legendary founder of Atari and Chuck E. Cheese’s and Steve Jobs’s first boss, the secrets to finding, hiring, keeping, and nurturing creative talent.

The business world is changing faster than ever, and every day your company faces new complications and difficulties. The only way to resolve these issues is to have a staff of wildly creative people who live as much in the future as the present, who thrive on being different, and whose ideas will guarantee that your company will prosper when other companies fail.

A celebrated visionary and iconoclast, Nolan Bushnell founded the groundbreaking gaming company Atari before he went on to found Chuck E. Cheese’s and two dozen other companies. He also happened to launch the career of the late Steve Jobs, along with those of many other bril­liant creatives over the course of his five decades in business.

With refreshing candor, keen psychological insight, and robust humor, Bushnell explains in Finding the Next Steve Jobs how to think boldly and differently about companies and organizations—and spe­cifically the people who work within them. For anyone trying to turn a company into the next Atari or Apple, build a more creative workforce, or fashion a career in a changing world, this book will enlighten, challenge, surprise, and amuse.

Praise For Finding the Next Steve Jobs: How to Find, Keep, and Nurture Talent…

An absolutely invaluable book by the founder of Atari and the man who launched Steve Jobs' career
— Walter Isaacson, author of Steve Jobs

The man who helped give a generation the game of Pong now gives a new generation a series of pongs for their careers. Nolan Bushnell's book is a spirited and insightful road map for anyone trying to navigate the new world of work.
— Daniel H. Pink, author of To Sell is Human, A Whole New Mind and Drive

Nolan is a genius, and a generous one, too. Like most geniuses who share their secrets, his secrets are simple, and available to anyone with the guts to listen.
— Seth Godin, author of The Icarus Deception

Nolan Bushnell is a technology pioneer, entrepreneur, and engineer. Often cited as the father of the video-game industry, he is best known as the founder of Atari Corporation and Chuck E. Cheese’s Pizza Time Theater. Over the past four decades he has founded numerous companies, including Catalyst Technologies, the first technology incubator; Etak, the first digital navigation system; ByVideo, the first online ordering system; and uWink, the first touchscreen menu ordering and entertainment system, among others.

Gene Stone has written, cowritten, or ghost-written more than forty-five books on a wide variety of subjects, including the bestsellers Forks Over Knives, How Not to Die, Living the Farm Sanctuary Life, and The Engine 2 Diet.
Loading...
or
Not Currently Available for Direct Purchase