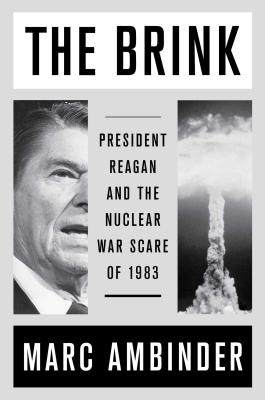 President Reagan and the Nuclear War Scare of 1983

The incredible story of the 1983 war game that triggered a tense, brittle period of nuclear brinkmanship between the United States and the former Soviet Union.

What happened in 1983 to make the Soviet Union so afraid of a potential nuclear strike from the United States that they sent mobile ICBMs (intercontinental ballistic missiles) into the field, placing them on a three-minute alert?

Marc Ambinder explains the anxious period between the United States and the Soviet Union from 1982 to 1984, with the “Able Archer ’83” war game as the fulcrum of the tension. With astonishing and clarifying new details, he recounts the scary series of the close encounters that tested the limits of ordinary humans and powerful leaders alike. Ambinder explains how political leadership ultimately triumphed over misunderstandings, helping the two countries maintain a fragile peace.

Ambinder provides a comprehensive and chilling account of the nuclear command and control process, from intelligence warnings to the composition of the nuclear codes themselves. And he affords glimpses into the secret world of a preemptive electronic attack that scared the Soviet Union into action. Ambinder’s account reads like a thriller, recounting the spy-versus-spy games that kept both countries—and the world—in check.

From geopolitics in Moscow and Washington, to sweat-caked soldiers fighting in the trenches of the Cold War, to high-stakes war games across NATO and the Warsaw Pact, The Brink serves as the definitive intelligence, nuclear, and national security history of one of the most precarious times in recent memory.

Praise For The Brink: President Reagan and the Nuclear War Scare of 1983…

“Ambinder’s account of a serious threat of global annihilation—stemming from a 1983 NATO war exercise—is spellbinding. . . . a masterpiece of recent history.”—Publishers Weekly, Starred Review

“An informative and often enthralling book…Ambinder writes in the appealing style of Tom Clancy.”—Kirkus

"We may want to forget, but Marc Ambinder has forced us to remember how close we came to extinction during the waning years of the Cold War. The Brink is a compelling story not just of dangerous plans and terrifying exercises, but of the daily efforts of human beings in both the United States and the Soviet Union who were trying to stave off global nuclear war. As we head into another dangerous new era in the 21st century, The Brink should be required reading for citizens—and their leaders –who too often underestimate how difficult it was for all of us to reach the end of the 20th century without obliterating the planet."—Tom Nichols, author of No Use: Nuclear Weapons and U.S. National Security and The Death of Expertise

"Ambinder’s gifts as a scholar and storyteller keep the reader in a state of high suspense as he unspools the amazing untold true story of a simmering crisis with Russia that almost came to nuclear blows. In taking us for a thrill ride inside an intricate plot with intriguing characters, The Brink feels like fiction but it will stand as the definitive study of an episode in our history that put hundreds of millions of lives in jeopardy and bears lessons for the nuclear dangers we still face today.”—Bruce Blair, co-founder of Global Zero and Research Scholar, Program on Science and Global Security, Princeton University

Marc Ambinder is a highly regarded reporter, DuPont award-winning television producer, and teacher at the University of Southern California’s Annenberg School of Communication and Journalism. Ambinder was a White House correspondent for National Journal, the politics editor of The Atlantic, and an on-air analyst and consultant for CBS News. He spent four years at ABC News, covering politics and policy. Ambinder also consults for Fortune 100 companies on strategic and corporate communication. He lives in Los Angeles. He is the author of The Brink.
Loading...
or
Not Currently Available for Direct Purchase