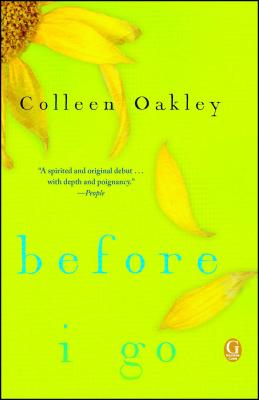 “After just a few years in remission, Daisy's breast cancer returns with a vengeance and she is given mere months to live. The love shared by Daisy and Jack, her husband, is unbounded and immense. While undergoing experimental cancer treatments, Daisy decides to look for her replacement, a new wife for Jack. She visits dog parks, bookstores, and finally lands upon the ideal woman through an online match service. No spoilers here, but suffice it to say that things do not go as planned. This book about cancer and death is filled with love and a grand sense of humor, is never maudlin or sappy, and serves as a necessary reality check for all of us.”
— Nancy Simpson-Brice, The Book Vault, Oskaloosa, IA
View the List

A People and US Weekly Pick

“An impressive feat…an immensely entertaining, moving, and believable read” (Atlanta Journal-Constitution), this debut novel in the bestselling tradition of P.S. I Love You revolves around a young woman with breast cancer who undertakes a mission to find a new wife for her husband before she passes away.

Twenty-seven-year-old Daisy already beat breast cancer four years ago. How can this be happening to her again?

On the eve of what was supposed to be a triumphant “Cancerversary” with her husband Jack to celebrate four years of being cancer-free, Daisy suffers a devastating blow: her doctor tells her that the cancer is back, but this time it’s an aggressive stage four diagnosis. She may have as few as four months left to live. Death is a frightening prospect—but not because she’s afraid for herself. She’s terrified of what will happen to her brilliant but otherwise charmingly helpless husband when she’s no longer there to take care of him. It’s this fear that keeps her up at night, until she stumbles on the solution: she has to find him another wife.

With a singular determination, Daisy scouts local parks and coffee shops and online dating sites looking for Jack’s perfect match. But the further she gets on her quest, the more she questions the sanity of her plan. As the thought of her husband with another woman becomes all too real, Daisy’s forced to decide what’s more important in the short amount of time she has left: her husband’s happiness—or her own?

Praise For Before I Go: A Book Club Recommendation!…

"Colleen Oakley takes on the big three--life, death,and love--and delivers a jewel. Before I Go absolutely glows with humor, wit, and compassion. I adore Oakley’s fresh voice and could hardly bear for the book to end."
— Lynn Cullen, author of the national bestseller MRS. POE

"In Before I Go, Oakley address the oft-asked question: if you only had six months to live, what would you do? In her deft hands, what could easily turn maudlin becomes a funny and insightful journey with Daisy, and the love of her life, Jack. If you loved JoJo Moyes' Me Before You, this book is for you."
— Catherine McKenzie, bestselling author of HIDDEN and FORGOTTEN

"What would you do if you knew you were dying? This emotional debut and its gutsy heroine will have you laughing through tears and staying up late until you’ve reached the final, fully satisfying page.”
— Jennie Shortridge, author of LOVE WATER MEMORY

“Brilliant in its simplicity, beautiful in its sentiment, heartbreaking in its honesty, Colleen Oakley’s Before I Go takes on one of life’s ultimate cruelties, death before one's time, and makes us believe.”
— Susan Crandall, author of WHISTLING PAST THE GRAVEYARD

“BEFORE I GO is a big-hearted tale, with a fresh take on a woman grappling with the inevitable. The characters are approachable, full of wit and humor and--above all else--touching sincerity.”
— Suzanne Ridell, author of THE OTHER TYPIST

"Oakley expertly tugs at the heartstrings with well-rounded characters and a liberal dose of gallows humor."
— Publishers Weekly

"This emotional novel will make readers laugh through their tears."
— Kirkus Reviews

“Oakley has produced an affecting work that, while avoiding maudlin sentimentality, makes the reader care about Daisy and her determination to live while dying.”
— Booklist

“Author Oakley has set herself a tricky balancing act here, blending a comic sensibility with the depth and poignancy her subject requires. She pulls it off.”
— People

"Oakley knocks it out of the park in her treatment of a very sensitive subject…pleasurable, thought-provoking reading."
— Athens Banner-Herald

Colleen Oakley is an Atlanta-based writer and author of the novel Before I Go. Her articles, essays, and interviews have been featured in The New York Times, Ladies’ Home Journal, Marie Claire, Women’s Health, Redbook, Parade, and Martha Stewart Weddings. Before she was a freelance writer, Colleen was editor in chief of Women’s Health & Fitness and senior editor at Marie Claire. Close Enough to Touch is her second novel.

After receiving the news from Dr. Saunders about the probable recurrence of her cancer, Daisy waits twenty-four hours before telling Jack. Why do you think she waited? What do you learn about Daisy and Jack’s relationship from the way they navigate the conversation when she tells him the news?

Daisy describes her observation about people from her work at a credit card call center by saying, “. . . most people just want to talk. To be heard. Even if it is by a stranger. Or maybe, especially if it’s a stranger.” Do you think she wants this for herself? Is this observation true for you? Why or why not?

On page 78, Daisy says: “. . . there’s only one thing that’s worse than actually having cancer, and that’s having to tell people you have cancer.” What do you think makes talking about cancer (or any other serious illness) so awkward for most people? How would you want people to respond if you were in Daisy’s situation?

How is Daisy’s response to the question “If you knew you were going to die in one month, what would you do?” different at age twenty-seven than it was at age twenty-one? How did she use the first month following the news about her cancer’s recurrence? What did you feel toward her as you read the story of how she was spending her days? How would you answer the question?

How would you describe Jack’s response to Daisy as she pushes him away? Do you think he represents a typical partner’s response? Why or why not? How would you respond to someone you knew had a serious illness and seemed to be pushing you away?

What do you think Daisy is trying to avoid by focusing on planning Jack’s future before she dies?

Describe Daisy’s friendship with Kayleigh. In what ways are they similar? How are they opposite? Do you relate to the kind of friendship they share? Describe.

What do you think were some of the factors that precipitated Daisy’s panic attacks? Have you ever experienced a panic attack or known someone who has?

Describe the bargain Jack and Daisy made about each others’ schooling when they learned about the extent of her cancer recurrence. Why do you think Daisy was so intent on Jack continuing school in the midst of her cancer treatments? Would you have made the same decision? Why or why not?

What role does Pamela play in the story? How does she serve a similar function for both Daisy and Jack?

Based on what you learn about Daisy’s life as a young girl, what are some of the ways she has learned to cope with pain and disappointment in her life? How do those strategies serve or hinder her when she’s diagnosed with Lots of Cancer?

On page 219, Daisy quotes a therapist she saw once who said, “anger is grief wearing a disguise.” Do you agree? Why or why not? Do you think Daisy would agree at the end of the story?

How do you feel about the way the story ended?