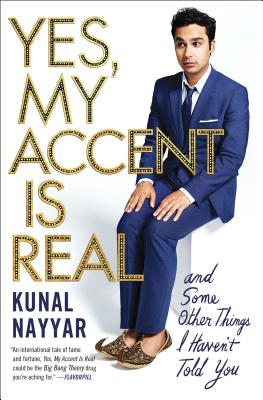 Yes, My Accent Is Real

And Some Other Things I Haven't Told You

In the spirit of Mindy Kaling’s bestseller Is Everyone Hanging Out Without Me? or Judd Apatow’s Sick in the Head, a collection of humorous, autobiographical essays from Kunal Nayyar, best known as Raj on CBS’s #1 hit comedy The Big Bang Theory.

Of all the charming misfits on television, there’s no doubt Raj from The Big Bang Theory—the sincere yet incurably geeky Indian astrophysicist—ranks among the misfittingest. Now, we meet the actor who is every bit as loveable as the character he plays on TV. In this revealing collection of essays written in his irreverent, hilarious, and self-deprecating voice, Kunal Nayyar traces his journey from a little boy in New Delhi who mistakes an awkward first kiss for a sacred commitment, gets nosebleeds chugging Coca-Cola to impress other students, and excels in the sport of badminton, to the confident, successful actor on the set of TV’s most-watched sitcom since Friends.

Going behind the scenes of The Big Bang Theory and into his personal experiences, Kunal introduces readers to the people who helped him grow, such as his James Bond-loving, mustachioed father. Kunal also walks us through his college years in Portland, where he takes his first sips of alcohol and learns to let loose with his French, 6’8” gentle-giant roommate, works his first-ever job for the university’s housekeeping department cleaning toilets for minimum wage, and begins a series of romantic exploits that go just about as well as they would for Raj. (That is, until he meets and marries a former Miss India in an elaborate seven-day event that we get to experience in a chapter titled “My Big Fat Indian Wedding.”)

Full of heart, but never taking itself too seriously, this witty collection of underdog tales follows a young man as he traverses two continents in search of a dream, along the way transcending culture and language (and many, many embarrassing incidents) to somehow miraculously land the role of a lifetime.

Praise For Yes, My Accent Is Real: And Some Other Things I Haven't Told You…

“Employing a charming, self-deprecating tone, [Nayyar] writes that he’s too young for a memoir, so these anecdotes are merely stories from his life – humorous, insightful, heartfelt, and heartwarming autobiographical essays."
— Booklist

"The author’s charming style will keep readers invested, while the portrait of his family is beguiling in its sweetness and sincerity. A must for those who enjoyed Mindy Kaling's Is Everyone Hanging Out Without Me? or Judd Apatow's Sick in the Head."
— Library Journal

“An international tale of fame and fortune, Yes, My Accent is Real could be The Big Bang Theory drug you’re aching for."
— Flavorpill

“Anyone who has ever had an awkward childhoodor teenage moment will be able to relate to the situations Kunal went through,and this is one of those rare not-a-memoirs which is honest, and shows theauthor’s own flaws. Rather than asking ‘why me,’ Kunal owns his mistakesand learns from them, which is rather refreshing.”
— 100PercentRock.com

Kunal Nayyar was born in London and raised in New Delhi, India. He first came to the United States in 1999 to pursue a bachelor’s degree in business administration and went on to receive an MFA in acting from Temple University. Playing the character of Raj on The Big Bang Theory, he has been part of the ensemble since the show debuted in 2007. He lives in Los Angeles with his wife, Neha.
Loading...
or support indie stores by buying on