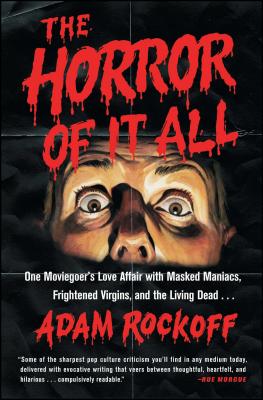 The Horror of It All

One Moviegoer's Love Affair with Masked Maniacs, Frightened Virgins, and the Living Dead...

Pop culture history meets blood-soaked memoir as Adam Rockoff, “a passionate fan of the horror genre in all its forms,” (The New York Times) recalls a life spent watching blockbuster slasher films, cult classics, and everything in between.

Horror films have simultaneously captivated and terrified audiences for generations, racking up millions of dollars at the box office and infusing our nightmares with chainsaws, goblins, and blood-spattered machetes. Today’s hottest television shows feature classic horror elements, from marauding zombies and sexy vampires to myriad incarnations of the devil himself. Yet the horror genre and its controversial offshoots continue to occupy a nebulous space in our critical dialogue. The Horror of It All is a memoir from the front lines of the horror industry that dissects (and occasionally defends) the massively popular phenomenon of scary movies.

Author Adam Rockoff delivers “the sharpest pop culture criticism you’ll find in any medium today,” (Rue Morgue) as he traces the highs and lows of the genre through the lens of his own obsessive fandom, which began in the horror aisles of his childhood video store and continued with a steady diet of cable trash. From the convergence of horror and heavy metal, to Siskel and Ebert’s crusade against the slasher flick, to the legacy of the Scream franchise, and the behind-the-scenes work of horror directors and make-up artists, Rockoff mines the rich history of the genre, braiding critical analysis with his own firsthand experiences as a horror writer and producer. Filled with mordant wit and sharp insight, The Horror of It All “is an amiable and often amusing guide” (Kirkus Reviews) that explains why horror films not only endure, but continue to prosper. Be afraid. Be very afraid.

Praise For The Horror of It All: One Moviegoer's Love Affair with Masked Maniacs, Frightened Virgins, and the Living Dead...…

Rockoff is an amiable and often amusing guide…a passionate defender of the creative rights of filmmakers, no matter how shocking or disturbing their creations might be, and a convincing advocate for scary movies as transgressive art—or just plain fun.”
— Kirkus

“Adam Rockoff is the ultimate authority on horror film andfandom, and no one captures the full dimensions of the genre with greater wit,humor, nostalgia and charm. The Horror of it All is bloodybrilliant!”
— Adrienne King, star of "Friday the 13th"

"Adam Rockoff's The Horror of It All may well have been titled Everything You Always Wanted to Know About the Horror Industry… But Were Too Afraid To Ask. It's a no bullshit look at the culture of horror and the films that define it, from a professional who hasn't lost his ability to be a fan. Written with the know-how of an academic and the crackerjack honesty of bathroom graffiti, The Horror of It All will satiate horror hounds and film buffs alike."
— Rodrigo Gudiño, RUE MORGUE

"[Rockoff] knows horror movies like the Colonel knows chicken.... Rockoff’s genuine love for the genre shouts from every page."
— Buzzymag.com

“Some of the sharpest pop culture criticism you’ll find in any medium today, delivered with evocative writing that veers between thoughtful, heartfelt and hilarious….a compulsively readable package that’s likely to become the most popular non-fiction book horror aficionados will clamor for this year.”
— Rue Morgue

"Adam Rockoff writes from his heart with cleverness and wit as well as a hell of a lot of knowledge. The Horror Of It All is right up there with any classic tome of horror criticism and history."
— Scream Magazine

“The author is a passionate fan of the horror genre in all its forms….The Horror of It All twitches with manic, foul-mouthed, bloggy energy.”
— The New York Times Book Review

Adam Rockoff is the screenwriter of Wicked Lake, a film so depraved it caused Ron Jeremy to storm out of the theater in anger. However, his 2010 adaptation of the classic exploitation film, I Spit on Your Grave, received nearly unanimous praise from horror critics. His first book, Going to Pieces: The Rise and Fall of the Slasher Film, 1978-1986, a critical examination of the slasher genre, was made into a documentary which premiered on STARZ. When he’s not getting his hands bloody, Rockoff runs the television production company, FlashRock Films.
Loading...
or support indie stores by buying on