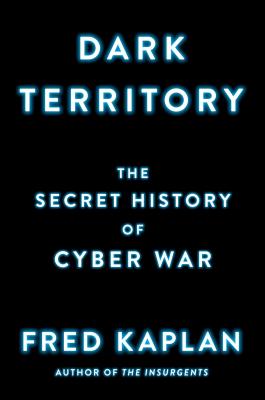 As cyber-attacks dominate front-page news, as hackers join terrorists on the list of global threats, and as top generals warn of a coming cyber war, few books are more timely and enlightening than Dark Territory: The Secret History of Cyber War, by Slate columnist and Pulitzer Prize–winning journalist Fred Kaplan.

Kaplan probes the inner corridors of the National Security Agency, the beyond-top-secret cyber units in the Pentagon, the "information warfare" squads of the military services, and the national security debates in the White House, to tell this never-before-told story of the officers, policymakers, scientists, and spies who devised this new form of warfare and who have been planning—and (more often than people know) fighting—these wars for decades.

From the 1991 Gulf War to conflicts in Haiti, Serbia, Syria, the former Soviet republics, Iraq, and Iran, where cyber warfare played a significant role, Dark Territory chronicles, in fascinating detail, a little-known past that shines an unsettling light on our future.

"Dark Territory offers thrilling insights into high-level politics, eccentric computer hackers and information warfare. In 15 chapters—some of them named after classified codenames and official (and unofficial) hacking exercises—Kaplan has encapsulated the past, present and future of cyber war."
— The Financial Express

Praise for The Insurgents:

“Thrilling reading . . . A fascinating history . . . The Insurgents proceeds like a whodunit . . . An authoritative, gripping and somewhat terrifying account of how the American military approached two major wars in the combustible Islamic world . . . There is no one better equipped to tell the story than Fred Kaplan, a rare combination of defense intellectual and pugnacious reporter . . . He brings genuine expertise to his fine storytelling.”
— NYT Book Review

“Fred Kaplan has long been one of our most incisive thinkers about strategic issues. In this provocative book, he challenges many of our assumptions about the post-9/11 world and offers a dose of realism about the way the world actually works after the end of the Cold War. It’s a bracing read.”
— Walter Isaacson

Praise for The Wizards of Armageddon:

“Fascinating . . . It contains much that is not only new but stunning about the nation’s official thinking and planning for nuclear war.”
— Washington Post Book World

“An absorbing work . . . The story of the remarkable civilians who developed the novel field of nuclear strategy—men such as Bernard Brodie, William Kaufmann, Albert Wohlstetter, and Herman Kahn—is told admirably well. Even those who are familiar with this story will find fascinating details here.”
— Foreign Affairs