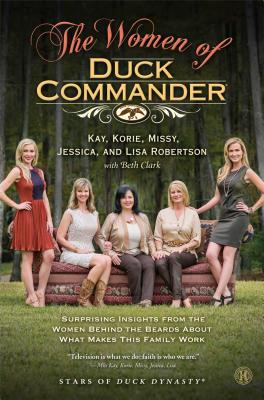 The Women of Duck Commander

Matriarch Miss Kay, Korie, Missy, Jessica, and Lisa Robertson speak out in this insightful book about their roles in the crazy Robertson family and the core values that make this family work.

An Inside Look at the Robertson Women

In the pages of this book, you’ll find both fun and inspirational stories . . .

Kay shares the honest story of her relationship with Phil—and his wild and philandering years—and the challenges of being a teenage mother. Even more amazing, she shares the forgiveness she offered Phil and how they have now celebrated forty-eight years of marriage.

Korie tells of her first encounter with Phil when she was in just the fifth grade. At that first meeting Phil came right out and told her what good husbands his boys would make and that she should keep an eye on them. She also shares the reaction her parents had when she told them that she and Willie were getting married when she was only eighteen.

Missy tells the story of their daughter, Mia, who was born with a cleft palate, and their adjustments to this condition and Mia’s joyful spirit that inspires them all.

Jessica recounts her first conversation with Jep and how unimpressed she was when Jep bragged that his dad was the Duck Commander Phil Robertson. She told him she’d heard of Daffy Duck, Donald Duck, and Duck, Duck, Goose— but not the Duck Commander.

Lisa reveals the serious marriage problems she and Al had—problems that almost ended their marriage for good—and how they worked through those issues to have a more stable and loving marriage than she ever imagined possible.

Kay Robertson is the revered matriarch of the Robertson family and star of A&E®’s Duck Dynasty®. For almost five decades, she’s been keeping Phil and her boys from spending too much time in the woods by bringing them back to civilization with a home cooked meal. Kay believes her cooking talents are a gift she must share, so she often ends up feeding all of the family and most of the neighborhood.

Lisa Robertson is the wife of Alan Robertson and worked with him at the church in several different ministries before joining him back at Duck Commander. She is a committed mother and grandmother and guides her family in the ways of faith.

Beth Clark is a writer and publishing consultant and runs a business called Thinkspot Communications in Franklin, Tennessee.
Loading...
or
Not Currently Available for Direct Purchase