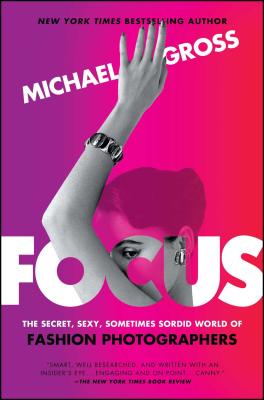 “This thoroughly absorbing narrative dazzles with the most profound investigation and research. Focus is an enthralling and riveting read.” —Tim Gunn

Tracing the highs and lows of fashion photography from the late 1940s to today, Focus takes you behind the scenes to reveal the revolutionary creative processes and fraught private passions of these visionary magicians, “delving deep into the fascinating rivalries” (The Daily News) between photographers, fashion editors, and publishers like Condé Nast and Hearst. Weaving together candid interviews, never-before-told insider anecdotes and insights born of his three decades of front-row and backstage reporting on modern fashion, Focus is “simply unrivaled…a sensation….Gross is a modern-day Vasari, giving us The Lives of the Artists in no small measure” (CraveOnline).

Michael Gross is the author of the New York Times bestsellers House of Outrageous Fortune, 740 Park, and Model: The Ugly Business of Beautiful Women, as well as Rogues’ Gallery, and Unreal Estate. A contributing editor of Departures, he created the blog Gripepad and has written for The New York Times, New York, Vanity Fair, Esquire, GQ, The Daily Beast/Newsweek, and many other publications.

"An often-shocking tale rife with bed-hopping hotties, rampant drug use and cut-throat antics. Gross knows his stuff, delving deep into the fascinating rivalries and wicked manipulations that take place behind the cameras."
— Larry McShane

"A juicy history of scandalous lives."

"Focus finds the fire beneath the ice of glossy magazine pages, and does it without burning down the house.”

“Tales of famous shoots and industry backstories during the ‘glory days’ of the genre…of the sexual promiscuity and recreational drug use of these (mostly male) photographers. The subject matter will be historically significant to those who are concerned with the photo artist’s role in the golden age of modern fashion photography. VERDICT: Recommended for enthusiasts of fashion and fashion photography.”
— Shauna Frischkorn

“A gossipy exposé … of the talented, arrogant, philandering, combative, self-aggrandizing photographers whose work appeared in, and defined, such iconic fashion magazines as Harper’s Bazaar, Vogue, Glamour, and Elle from 1947 to 1997 … sometimes-tangy, often scurrilous … Not a pretty picture.”
or
Not Currently Available for Direct Purchase
Copyright © 2020 American Booksellers Association