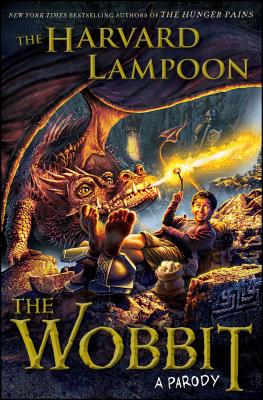 From the authors of the New York Times bestselling parody The Hunger Pains, this fresh take on J.R.R. Tolkien’s The Hobbit is a hilarious send-up of Middle-earth, publishing just in time for the major motion picture release of The Hobbit: The Desolation of Smaug.

When Aaron Sorkinshield and his band of Little People embark on a totally feasible quest to reclaim the hoard of Academy Awards stolen from them by the lonely Puff the Magic Dragon, senile wizard Dumbledalf suggests an unlikely and completely unqualified accomplice: Billy Bagboy, an unassuming wobbit dwelling in terrorist-riddled Wobbottabad.

Along the way, the company faces Internet trolls, moblins, one really big spider that must be at least an inch and a half wide, and worse. But as they journey from the wonders of Livinwell to the terrors of Jerkwood and beyond, Billy will find that there is more to him than anyone—Tolkien included—ever dreamed. Propelled to his destiny by a series of courageous adventures and indented paragraphs, Billy will set out on the greatest YOLO of all time . . . one that leads deep into the dark caverns hiding a mysterious man named Goldstein, who’s just trying to have a nice seder.

Praise For The Wobbit: A Parody…

"Yes, the rumors are true. I am the Harvard Lampoon."
— J.K. Rowling

“I could see this being a great three-minute animated short.”
— Peter Jackson

“Thanks, Mom. This book has finally bridged the growing gap between us.”
— your teenage son

“I love the twist ending where it turns out that all along you were reading about sexy people.”
— E.L. James

The Harvard Lampoon debuted in February 1876 and is the world’s longest continually published humor magazine. Lampoon alumni include comedians Conan O’Brien, Andy Borowitz, Greg Daniels, Jim Downey, Al Jean, and B.J. Novak. Other alums have written for Saturday Night Live, The Simpsons, Futurama, Late Night with David Letterman, Seinfeld, 30 Rock, and dozens of other shows. The Harvard Lampoon is also the author of Nightlight and The Hunger Pains. Visit HarvardLampoon.com.
Loading...
or support indie stores by buying on