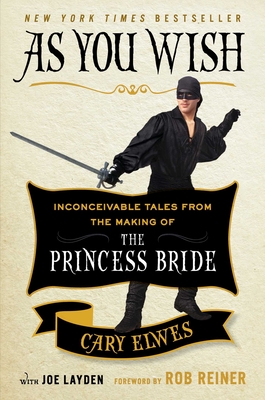 “Cary Elwes' book recounts the wacky antics of Billy Crystal, Rob Reiner and others behind 'The Princess Bride'… . [A] delightful remembrance of the three months he spent making the unsung movie that went on to become a family classic.”
— New York Daily News

“[A] fascinating memoir…Cary Elwes has proved that he is as adept with the mighty pen as he is with the powerful sword. …A treasure trove of fascinating behind-the-scenes accounts. … As You Wish is thoughtfully and seamlessly compiled.”
— New Orleans Living Magazine

“Even if you don’t have a crush on Cary Elwes, you’ll enjoy this vivid behind-the-scenes account of the making of The Princess Bride. His stories, especially those involving Andre the Giant, will leave you in stitches. Robin Wright, Mandy Patinkin, Billy Crystal, and others also recount their experiences. An amusing account of a group of performers who came together to make a heartfelt film that is loved by many.”
— Library Journal

“The movie The Princess Bride achieved a certain cinematic magic, which Elwes (Westley) captures in his warm and revealing behind-the-scenes account.”
— Publishers Weekly

Award-winning journalist and bestselling author Joe Layden has written more than thirty books for adults and children, including the critically acclaimed title, The Last Great Fight and the #1 New York Times bestseller The Rock Says. He lives in Saratoga Springs, New York, with his wife, Susan, and their two children.