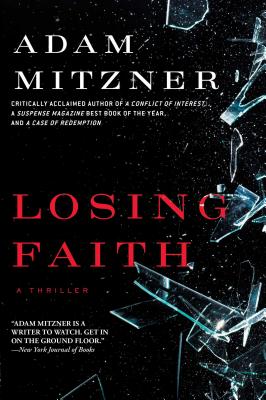 Adam Mitzner’s critically acclaimed legal thrillers have “more loops and flips than Coney Island’s Cyclone” (Kirkus Reviews) and “more twists than a California cloverleaf interchange” (Bookreporter). His latest, a captivating examination of justice and ethics, will leave you guessing until the last page.

Aaron Littman is the premier lawyer of his generation and the chairman of Cromwell Altman, the most powerful law firm in New York City, when a high-profile new client threatens all that he’s achieved—and more. Nicolai Garkov is currently the most reviled figure in America, accused of laundering funds for the Russian Mafia and financing a terrorist bombing in Red Square that killed twenty-six people, including three American students.

Garkov is completely unrepentant, admitting his guilt to Aaron, but with a plan for exoneration that includes blackmailing the presiding judge, the Honorable Faith Nichols. If the judge won’t do his bidding, Garkov promises to go public with irrefutable evidence of an affair between Aaron and Faith—the consequences of which would not only destroy their reputations but quite possibly end their careers.

Garkov has made his move. Now it’s Aaron and Faith’s turn. And in an ever-shocking psychological game of power, ethics, lies, and justice, they could never have predicted where those moves will take them—or what they are prepared to do to protect the truth.