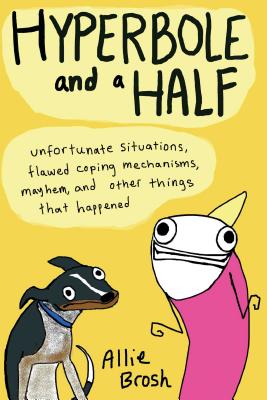 Hyperbole and a Half

“Brosh has been an Internet sensation for years with literally thousands of fans following her scribbled illustrations on her blog. She has won over readers and stalkers alike with her honest and stark humor and her fun stories and rants. This book takes readers into not just the fun and fuzzy world of candied cakes and dumb dogs, but also into the brutally honest self-evaluation and exploration of its unique author. Always balancing the serious with the silly, the dark with the ridiculous, Brosh says the things we wish we could, admits the things we're ashamed of, and explores what we're afraid of, always with color and humor and, ultimately, with hope. And don't forget the scribbles!”
— Jocelyn Shratter, Bookshop Santa Cruz, Santa Cruz, CA
View the List

“Funny and smart as hell” (Bill Gates), Allie Brosh’s Hyperbole and a Half showcases her unique voice, leaping wit, and her ability to capture complex emotions with deceptively simple illustrations.

FROM THE PUBLISHER:
Every time Allie Brosh posts something new on her hugely popular blog Hyperbole and a Half the internet rejoices.

This full-color, beautifully illustrated edition features more than fifty percent new content, with ten never-before-seen essays and one wholly revised and expanded piece as well as classics from the website like, “The God of Cake,” “Dogs Don’t Understand Basic Concepts Like Moving,” and her astonishing, “Adventures in Depression,” and “Depression Part Two,” which have been hailed as some of the most insightful meditations on the disease ever written.

Brosh’s debut marks the launch of a major new American humorist who will surely make even the biggest scrooge or snob laugh. We dare you not to.

FROM THE AUTHOR:
This is a book I wrote. Because I wrote it, I had to figure out what to put on the back cover to explain what it is. I tried to write a long, third-person summary that would imply how great the book is and also sound vaguely authoritative—like maybe someone who isn’t me wrote it—but I soon discovered that I’m not sneaky enough to pull it off convincingly. So I decided to just make a list of things that are in the book:

*These are lies. Perhaps I have underestimated my sneakiness!

Praise For Hyperbole and a Half: Unfortunate Situations, Flawed Coping Mechanisms, Mayhem, and Other Things That Happened…

"My wife, who rarely reads a book published after 1910 and who is difficult to make laugh, wept with pleasure while reading these comic illustrated essays from Ms. Brosh, who runs a popular web comic and blog. I had to find out what the fuss was about. The subjects run from light (cakes, dogs) to dark (the author’s own severe depression), and they foreground offbeat feeling and real intellect. Ms. Brosh’s inquisitive mind won me over, too."
— Dwight Garner

"Now that the phrase 'LOL' has gotten so overused, it’s hard to imagine that anything really makes people laugh out loud anymore. But the crudely drawn cartoons in Allie Brosh’s Hyperbole and a Half, culled from her popular blog and reprinted alongside never-before-seen materials, will make you laugh until you sob, even when Brosh describes her struggle with depression."
— Entertainment Weekly

“Once I started reading “Hyperbole and a Half,” I found myself unable to stop—except to laugh uproariously.”

"Allie Brosh's artwork may look deceptively simple, but her comics are anything but. She is gut-bustingly hilarious, especially when she talks about her ridiculous dogs, but also insightful and phenomenally articulate; her treatise on what it feels like to suffer from depression remains, in all honesty, one of the best things ever produced on the internet (and it's still somehow massively entertaining, too). Get this for the smart people who appreciate humor in your life, and they won't be disappointed."
— io9.com

“Brosh is a connoisseur of the human condition. In her typical self-deprecating and dramatic manner (hence the hyperbole reference), she tells personal stories that name things we can all relate to, including fear, love, depression and hope. Perhaps the most endearing thing about her writing is that she approaches her subject matter from a vulnerable, childlike place, complete with Paintbrush caricatures that have arguably already earned iconic status. . . . Part graphic novel, part confessional, overall delightful.”
— Kirkus Reviews

"This book made me laugh, cry, and leak. It was honest, poignant, and ridiculously silly in all the best ways and I'm better for having read it. Plus, doggies!"
— Jenny Lawson, The Bloggess and author of Let's Pretend This Never Happened

“Here’s a rough analogy: David Sedaris sets out to write a graphic memoir, but decides to use the MS Paint application on his computer rather than hire an artist….[Brosh’s] naïve art plays brilliantly against dark comic themes.”
— Michael Humphrey, True/Slant

Allie Brosh's artwork may look deceptively simple, but her comics are anything but. She is gut-bustingly hilarious, especially when she talks about her ridiculous dogs, but also insightful and phenomenally articulate; her treatise on what it feels like to suffer from depression remains, in all honesty, one of the best things ever produced on the internet (and it's still somehow massively entertaining, too). Get this for the smart people who appreciate humor in your life, and they won't be disappointed."
— io9.com

“The whole blog is inspired.”
— Andrew Sullivan, The Daily Dish (The Atlantic)

"Brosh is unlike anyone else in the field today, an Internet-era treasure, an unexpected wonder of the 21st century."
— Cory Doctorow, BoingBoing.com

"Both singular and familiar—the popularity of Brosh's blog and her absurd, exuberant voice meant that she started a lot of memes you might have come across—Hyperbole and a Half is a very funny reminder that it's normal to not have your shit together, and to know that it's okay to ask for help."
— GQ

Allie Brosh is the author of the #1 New York Times bestsellers Solutions and Other Problems and Hyperbole and a Half, which was named the Goodreads Choice Award Winner for Best Humor Book of the Year. Brosh has also given herself many prestigious awards, including “fanciest horse drawing” and “most likely to succeed.” Find out more at HyperboleandaHalf.blogspot.com.
Loading...
or
Not Currently Available for Direct Purchase