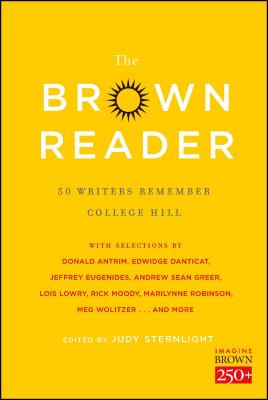 “To be up all night in the darkness of your youth but to be ready for the day to come…that was what going to Brown felt like.” —Jeffrey Eugenides

In celebration of Brown University’s 250th anniversary, fifty remarkable, prizewinning writers and artists who went to Brown provide unique stories—many published for the first time—about their adventures on College Hill. Funny, poignant, subversive, and nostalgic, the essays, comics, and poems in this collection paint a vivid picture of college life, from the 1950s to the present, at one of America’s most interesting universities.

“At Brown, we felt safely ensconced in a carefree, counterculture cocoon—free to criticize the university president, join a strike by cafeteria workers, break china laughing, or kiss the sky.” —Pamela Constable

Rick Moody is the author of the award-winning memoir The Black Veil, the novels Hotels of North America, The Four Fingers of Death, The Diviners, Purple America, The Ice Storm, Garden State, and multiple collections of short fiction. Moody is the recipient of a Guggenheim Fellowship, and his work has been anthologized in Best American Stories, Best American Essays, and the Pushcart Prize anthology. He lives in Rhode Island.

Susan Cheever is the bestselling author of thirteen previous books, including five novels and the memoirs Note Found in a Bottle and Home Before Dark. Her work has been nominated for the National Book Critics Circle Award and won the Boston Globe Winship Medal. She is a Guggenheim Fellow, a member of the Corporation of Yaddo, and a member of the Author's Guild Council. She teaches in the Bennington College M.F.A. program. She lives in New York City with her family.
Loading...
or
Not Currently Available for Direct Purchase