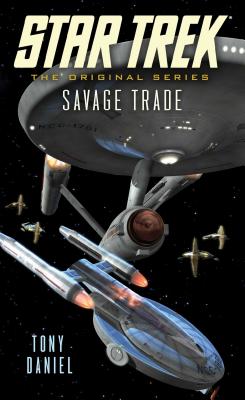 The U.S.S. Enterprise under the command of Captain James T. Kirk is en route to the extreme edge of the Alpha Quadrant, and to a region known as the Vara Nebula. Its mission: to investigate why science outpost Zeta Gibraltar is not answering all Federation hailing messages. When the Enterprise arrives, a scan shows no life forms in the science station. Kirk leads a landing party and quickly discovers the reason for the strange silence—signs of a violent firefight are everywhere. Zeta Gibraltar has been completely raided. Yet there are no bodies and the entire roster of station personnel is missing…

Tony Daniel is a science fiction writer and author of Star Trek: The Original Series: Devil’s Bargain, Guardian of Night, Metaplanetary, Superluminal, Earthling, Warpath, and short stories such as “A Dry, Quiet War.” With David Drake, he is the author of The Heretic and The Savior. He is also an editor at Baen Books. He’s had multiple stories in Year’s Best anthologies, one of which, “Life on the Moon,” won the Asimov’s Reader’s Poll Award for year’s best story and was nominated for a Hugo Award.
or support indie stores by buying on
Copyright © 2020 American Booksellers Association