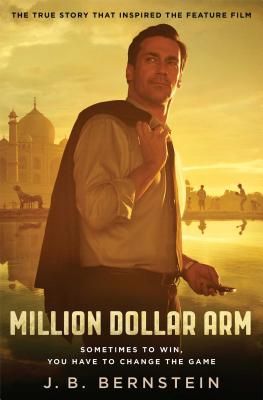 Sometimes to Win, You Have to Change the Game

From the farmlands of India to the fields of major league baseball, this fascinating memoir tells the story of a man who forever changed the lives of two talented young men through a pitching contest in India. The official tie-in book to Disney’s major motion picture, starring Jon Hamm.

A TRUE STORY OF FINDING THE AMERICAN DREAM . . . ABROAD

India is a country with more than one billion people, a fanatical national cricket obsession, and exactly zero talent scouts. There, superstar sports agent J. B. Bernstein knew that he could find the Yao Ming of baseball— someone with a strong arm and enough raw talent to pitch in the major leagues. Almost no one in India is familiar with the game, but Bernstein had heard enough coaches swear that if you gave them a guy who throws a hundred miles an hour, they could teach him how to pitch. So in 2007, Bernstein flew to Mumbai with a radar gun and a plan to find his diamond in the rough. His idea was The Million Dollar Arm, a reality television competition with a huge cash prize and a chance to become the first native of India to sign a contract with an American major-league team.

The result is a humorous and inspiring story about three guys transformed: Bernstein, the consummate bachelor and shrewd businessman, and Dinesh and Rinku, the two young men from small farming villages whom he brought home to California. Million Dollar Arm is a timeless reflection on baseball and the American dream, as well as a tale of victory over incredible odds. But, above all, it’s about the limitless possibilities inside every one of us.

J.B. Bernstein is the cofounder and president of Access Group, an athlete management firm that has represented some of the greatest athletes of all time, including Barry Bonds, Barry Sanders, and Emmitt Smith. Bernstein created the Million Dollar Arm contest in India, which yielded the first two Indian men to ever sign pro sports contracts in the US.
Loading...
or
Not Currently Available for Direct Purchase