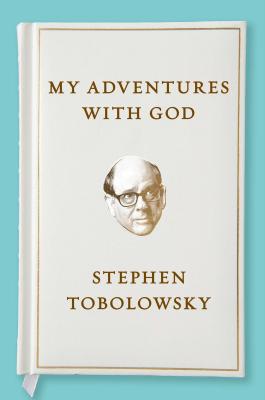 My Adventures with God (Hardcover)

From legendary character actor Stephen Tobolowsky—who currently appears on The Goldbergs, HBO’s Silicon Valley, and Norman Lear’s new One Day at a Time, author of The Dangerous Animals Club and The Tobolowsky Files podcast—My Adventures with God is a funny, introspective collection about love, catastrophe, and triumph, all told through the lens of his evolving relationship with the mystery that is “God.”

As Tobolowsky explains, “It’s hard to believe in nothing. Even cats believe in suppertime. As much as we love certainty, we are often shaped by the invisible, the unexplainable—something we call faith. We are inclined to acknowledge the holy. Even if it is only a paper heart we find in an old suitcase.”

My Adventures with God is a series of short stories exploring the idea that most people’s lives seem to fit into the template of the Old Testament. We all have powerful creation myths: tales of our childhood and family, our first battles won and lost. It is our Genesis. Then, like in the Book of Exodus, we go into slavery. Rather than building pyramids, we lose ourselves in fear and ambition—in first loves, first jobs, too many dreams mixed with too much beer. We eventually become free, only to wander in the wilderness. At some point we stop and proclaim to the universe who we are. This is our Leviticus moment. We reconcile what we thought we would be with what we have become. We often attempt a mid-course correction. Then, as in the Book of Numbers, we are shaped by mortality as we bear the loss of family and friends. Finally, we retell our stories to our children hoping to make sense of the journey, as Moses did in Deuteronomy.

Tobolowsky’s stories tell of a boy growing up in the wilds of Texas, finding and losing love, losing and finding himself—all told through the prism of the Torah and Talmud, mixed with insights from science, and refined through a child’s sense of wonder. My Adventures with God not only shines a light into the life of one of America’s most beloved actors, but also provides a structure to evaluate our own lives and relationship with God.

Stephen Tobolowsky has appeared in more than 100 movies and 200 television shows, including unforgettable roles in Mississippi Burning, Groundhog Day, and Memento. He is the author of The Dangerous Animals Club and My Adventures with God. He lives in Los Angeles with his wife and sons.

Praise For My Adventures with God…

“My Adventures with God is a delight. Stephen Tobolowsky has crafted a series of true stories that wrestle with a big idea: how belief shapes our lives. Funny, smart, and moving, this is a wonderful account of our relationship with the unknowable.”—Susan Orlean, New York Times bestselling author of The Orchid Thief and Rin Tin Tin

"Stephen Tobolowksy is a natural storyteller. I found myself laughing giddily throughout his fascinating & strangely profound memoir. I hope God gets a chance to read it!"—Rainn Wilson, The Office and author of The Bassoon King

“It’s no secret that Stephen Tobolowsky is a splendid storyteller, so it was no surprise that I found My Adventures with God to be an absolute delight from start to finish.  You don’t have to be religious—much less Jewish— to enjoy all of the funny, moving, startling, touching, and eminently relatable stories contained therein.”—Steve Stoliar, author of Raised Eyebrows: My Years Inside Groucho's House

"Embrace that unknown, wrestle with it, and let yourself be comforted by the wisdom Stephen offers in this modern-day guidebook for our lives.”—Dan Adler, Vice President of Policy at the Energy Foundation and former agent at CAA

"Tobolowsky’s fast-paced, precise, wide-ranging, and impressive book draws on the I Ching, Talmud, Einstein, Grimms’ Fairy Tales, and reruns of SportsCenter to create counterpoints when discussing his life of faith. This is a well-told must-read for fans of Tobolowsky and for anyone interested in a comedic adventure with the divine."—Publishers Weekly
or
Not Currently Available for Direct Purchase
Copyright © 2020 American Booksellers Association