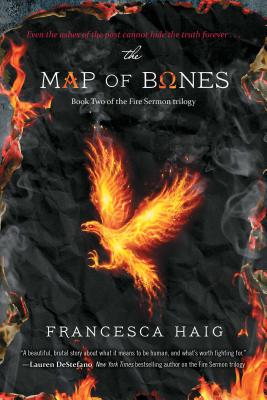 The Map of Bones (The Fire Sermon)

Four hundred years after a nuclear apocalypse, all humans are born in pairs: the Alphas, and their deformed Omega twins, who are ruthlessly oppressed. But despite their claims of superiority, the Alphas cannot escape one harsh fact: Whenever one twin dies, so does the other.

Following the events of The Fire Sermon, the Omega resistance has been brutally attacked, its members dead or in hiding. The Alpha Council’s plan for permanently containing the Omegas has begun. But all is not entirely lost: the Council’s seer, the Confessor, is dead, killed by her twin’s sacrifice.

Cass is left haunted by visions of the past, while her brother Zach’s cruelty and obsession push her to the edge and threaten to destroy everything she hopes for. As the country moves closer to all-out civil war, Cass will learn that to change the future she will need to uncover the past. But nothing can prepare her for what she discovers: a deeply buried secret that raises the stakes higher than ever before.

Praise For The Map of Bones (The Fire Sermon)…

"A beautiful, brutal story about what it means to be human, and what's worth fighting for."
— Lauren DeStefano, New York Times Bestselling author of The Chemical Garden trilogy

“A powerful post-apocalyptic story with unusual emotional depth and clear, often beautiful language, this is one genre fans won't want to miss.”
— Kirkus Reviews, starred review of THE MAP OF BONES

“Thrilling, emotionally engaging, booby-trapped with some incredibly inventive twists and turns and some excellent action sequences and, from beginning to end, it is intensely moving…Francesca Haig’s writing is exquisite, loaded with turns of phrase and lines of dialogue that are so perfect and so beautifully realized, it reminds us how powerful the written word can be…You have got to read these books, they are storytelling at its absolute finest.”
— Starburst Magazine on THE MAP OF BONES

"With captivating storytelling and an equally captivating heroine in Cass, Haig’s latest in her Fire Sermon trilogy truly excites. An intricately crafted plot with intense conflict and distinctive, flawed characters make this story hard to put down."
— RT Book Reviews on THE MAP OF BONES

“Incredibly unique premise… a juicy tale in which to spend a couple of hours…looking forward to book 3.”
— Geeks of Doom on THE MAP OF BONES

"As an award-winning poet, Haig's prose is gorgeous and engaging, particularly when she describes the desolate landscape, now peppered with ruins from the Before. Fans of dystopias will appreciate this adventure filled yet character-focused tale that offers hope and explores (in a refreshingly nuanced way) the moral complexities involved in defeating an oppressive and backward government structure."
— Booklist, starred review of THE FIRE SERMON

"Debut novelist Haig builds a richly textured world and creates characters who immediately feel real. The suspense of the plot, driven by the fear and anger underlying this unbreakable bond between twins, never flags. Haig's experience as a poet shows in her writing, which is clear, forceful and laced with bright threads of beauty. With its well-built world, vivid characters and suspenseful plot, this book, the first in a planned trilogy, is poised to become the next must-read hit."
— Kirkus, starred review of THE FIRE SERMON

“The best post-apocalyptic novel I’ve read in years – it’s dark, deep, and doesn’t conform to the dystopian tropes we’ve all come to expect.”
— The Mary Sue on THE FIRE SERMON

“A beautifully written tale of a dark and often unforgiving post-apocalyptic world . . . a spectacular introduction to the series."
— Fresh Fiction on THE FIRE SERMON