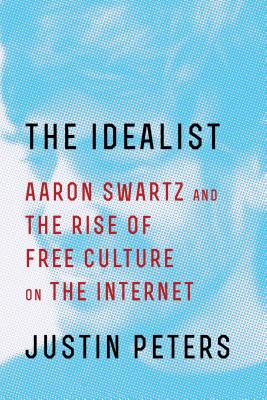 A smart, lively history of the Internet free culture movement and its larger effects on society—and the life and shocking suicide of Aaron Swartz, a founding developer of Reddit and Creative Commons—from Slate correspondent Justin Peters.

In vivid, accessible prose, The Idealist situates Swartz in the context of other "data moralists" past and present, from lexicographer Noah Webster to ebook pioneer Michael Hart to NSA whistleblower Edward Snowden. In the process, the book explores the history of copyright statutes and the public domain; examines archivists’ ongoing quest to build the “library of the future”; and charts the rise of open access, copyleft, and other ideologies that have come to challenge protectionist IP policies. Peters also breaks down the government’s case against Swartz and explains how we reached the point where federally funded academic research came to be considered private property, and downloading that material in bulk came to be considered a federal crime.

The Idealist is an important investigation of the fate of the digital commons in an increasingly corporatized Internet, and an essential look at the impact of the free culture movement on our daily lives and on generations to come.

"Riveting....Peters' book is a fascinating look not only at one of the Internet's most beloved whiz kids but also at the way copyright works and doesn't work in America today."

“We are lucky to have The Idealist, by the journalist Justin Peters. His account is part biography, part history of copyright law, and ultimately a cogent and readable précis of the life of a twenty-six-year-old genius who managed, over the course of a few years, to contribute to a lifetime’s worth of projects and initiatives.”

"What [The Idealist] does—and does very well—is put Swartz’s work in context. The book gives an engaging, if knowingly incomplete, account of the history of intellectual property and copyright law, the archaic roots (and current implications) of cyberlaw, and some key players in the ongoing fight between open-data philosophy and the federal government.

"Peters’ new book is an excellent survey of the [intellectual property] battlefield, and a sobering memorial to its most tragic victim."

“The Idealist hefts its burden of research and explanation with flair. Perhaps the greatest service Peters performs, though, is giving us Swartz’s own voice on page after page: a private soul with a gift for friendship; an idealist but no innocent; restless, precocious, growing and learning."

Justin Peters is a correspondent for Slate and a contributing editor at the Columbia Journalism Review. He has written for various national publications, including The New York Times, The Washington Monthly, and Travel + Leisure, and was the founding editor of Polite, a general-interest print journal. An alumnus of Cornell University and the Columbia University Graduate School of Journalism, he divides his time between Boston and Brooklyn.
Loading...
or
Not Currently Available for Direct Purchase