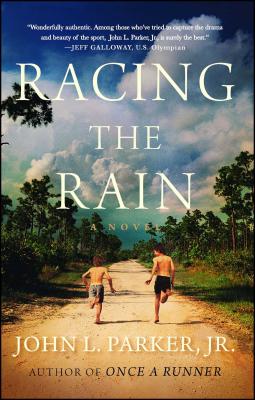 From the author of the New York Times bestselling Once a Runner—acclaimed by Runner’s World as “the best novel ever written about running”—comes that novel’s prequel, the story of a world-class athlete coming of age in the 1950s and ’60s on Florida’s Gold Coast.

Quenton Cassidy is the skinniest boy in school, and also one of the fastest. Cassidy spends his afternoons exploring his primal surroundings: the local river, the nearby ocean, the lakes, swamps, and forests that dominate the landscape of the Florida everglades. While adventuring, Cassidy befriends Trapper Nelson, an iconoclastic hunter who lives in an isolated compound on the riverbank.

By junior high, Cassidy dreams of becoming a basketball player, but Nelson’s influence runs deep and Cassidy begins to view running as a way to interact with the natural world. Warned of Nelson’s checkered past, Cassidy dismisses the stories as hearsay, until his town is rocked by the disappearance and apparent murder of a prominent judge and his wife. Cassidy’s loyalty to his friend is severely tested just as his opportunity to make his mark as a gifted runner comes to fruition.

Hailed by National Book Award winner Bob Shacochis as a “lovely novel that reminds us that what is most valuable is life is the spirit to accomplish impossible things,” Racing the Rain explores a small town’s secrets while vividly capturing the physical endurance, determination, and mindset required of a champion. “A celebration of the purity of the sport” (Fort Worth Star-Telegram), it is an epic coming-of-age classic about the environments and friendships that shape us all.

John L. Parker, Jr. has written for Outside, Runner’s World, and numerous other publications. A graduate of the University of Florida’s College of Journalism as well as its College of Law, Parker has been a practicing attorney, a newspaper reporter and columnist, a speechwriter for then Governor Bob Graham, and editorial director of Running Times magazine. The author of Once a Runner, Again to Carthage, and Racing the Rain, he lives in Gainesville, Florida, and Bar Harbor, Maine.

Praise For Racing the Rain: A Novel…

Praise for Racing the Rain:

“Dreamlike . . . The Florida imagery is as thick as the air is humid . . . The toughness required [to be a world-class runner] shines through in Cassidy in Racing the Rain as it once did in Once a Runner.” —The Philadelphia Inquirer

“[A] celebration of the purity of the sport.” —Fort Worth Star-Telegram

“For a young man or woman, the twenty-first century onslaught against purity and potential offers very few havens, but John L. Parker, Jr.'s lovely novel, Racing the Rain, reminds us that within amateur sports, especially a good foot race, all of us, athletes and spectators alike, might find what is most valuable in any life—the spirit to accomplish impossible things.”
—Bob Shacochis, National Book Award winner and author of The Woman Who Lost Her Soul

“Much of the intrigue of the book lies in discovering how Cassidy developed into the elite runner he became, when and how his talent revealed itself, and how he came to recognize his extraordinary ability to focus, train, and endure pain with purpose. But Racing the Rain offers myriad other delights, not the least of which is the friendship Cassidy strikes up with a (real life) swamp man named Trapper Nelson . . . [The book is] loaded with elegance and evocative writing. . . . A worthy, compelling, and satifying conclusion to the Quenton Cassidy trilogy.” —Paste Magazine

“In Racing the Rain, John L. Parker, Jr. not only creates the indomitable Quenton Cassidy, but perfectly captures the world that teaches him to be so enduring. From diving the Atlantic deeps to paddling the intracoastal waterways, young Cassidy develops the metabolism of a champion. Parker shows that the wilds of his beloved Loxahatchee River are just as good a cradle for a miler as the Colorado mountains or the Oregon woods. I was with him all the way.”
—Kenny Moore, former Senior Writer, Sports Illustrated, and 1968 and 1972 Olympic Marathoner

“If you, too, are a Quenton Cassidy geek, you must read the prequel to John L. Parker Jr.’s classic novel, Once a Runner. It’s called Racing the Rain and it evocatively reveals why Cassidy became consumed with ‘The Trial of Miles; Miles of Trials.’” —David Wiley, Runner’s World

“I absolutely loved this book…Filled with vivid descriptions that tingle the senses, Racing the Rain is a story of innocence and coming of age, and of ignoring self-doubt and overcoming limitations imposed by others. John L. Parker, Jr. shows us that with hard work, perseverance, friendships and loyalty, dreams do come true.”
—Marshall Ulrich, extreme endurance athlete and author of Running on Empty: An Ultramarathoner’s Story of Love, Loss, and a Record-Setting Run Across America

“Racing the Rain’s depiction of the running life and the Florida of an era gone by is wonderfully authentic. Among those who've tried to capture the drama and beauty of the sport, John L. Parker, Jr. is surely the best.”
—Jeff Galloway, U.S. Olympian

“Racing the Rain is a clear explanation of the beauty of our simple sport, and why that beauty is so priceless, and why becoming an athlete, and in particular a runner, and in particular a racer is so special. Racing the Rain is about friendship and struggle and the fun of being a kid who is feeling his way through life. Truly, every runner will say 'I know what you mean, John' when they read this book!”
—Bill Rodgers, four-time winner of the Boston Marathon

“[Once a Runner is] the best novel about running ever written.”
—Runner's World

“By far the most accurate fictional portrayal of the world of the serious runner . . . a marvelous description of the way it really is.”
—Kenny Moore, Sports Illustrated

“The best piece of running fiction around. Beg, borrow, or buy a copy, and you’ll never need another motivator.”
—David Langlais, Runner's World

“Time has not taken a toll on this gem. . . . Runners will find inspirational passages everywhere that they will want to save.”
—Star Tribune

“Again to Carthage is a worthy sequel, and could make a runner out of a couch potato. . . . Carthage becomes a training manual, a nutrition guide, a love story, and a celebration of friendship based on the shared experience of runners training to the very threshold of what the body can endure.”
—Chicago Sun-Times

“Part training manual, part religious tract, part love story, and all about running, Once a Runner is so inspiring it could be banned as a performance-enhancing drug.”
—Benjamin Cheever, author of Strides: Running Through History with an Unlikely Athlete, in Runner’s World

“Don’t let twenty years of pent-up anticipation and expectation ruin your run through this book. It’s paced a little like a marathon—controlled start, strong finish. . . . Don’t think you have to be a world-class athlete to connect with Quenton Cassidy and love this book. If you’ve ever trained and competed at your own highest level, you’ll get this guy.”
—The Kansas City Star

“Once a Runner’s famed ability to convey the thrill of the sport leaves its mark.”
—St. Louis Post-Dispatch

“There is a remarkable parallel between the pacing of this novel and a well-run race.”
—Ed Ayres, Running Times

“Perhaps the best novel ever written about running. There are parts of Once a Runner that are pure poetry. I enjoyed it thoroughly and have never read descriptions of what it is to run and race as accurate and compelling as Parker’s.”
—Tim Jordan, Track & Field News

“The author conveys the raw emotions that come with hard workouts and racing in a way that resonates with people devoted to the sport.”
—Buffalo News

“[Again to Carthage is] one of the best accounts in print of the physical and emotional torments athletes endure in their superhuman efforts.”
—St. Louis Post-Dispatch

“Breathtaking, pulse-quickening, stunning . . . [Again to Carthage] will have you standing up and cheering, and pulling on your running shoes.”
—Chicago Sun-Times

“The last three paragraphs . . . they’re perfect. You might have seen them coming, but I still think you’ll find yourself breaking into a smile.”
—Runner's World

“The training and racing sequences will resonate with anyone who has pinned on a race number whether for the Olympics or the neighborhood fun run.”
—Galveston Daily News
or
Buy Here
Copyright © 2020 American Booksellers Association