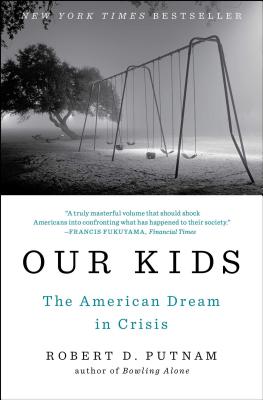 A New York Times bestseller and “a passionate, urgent” (The New Yorker) examination of the growing inequality gap from the bestselling author of Bowling Alone: why fewer Americans today have the opportunity for upward mobility.

Central to the very idea of America is the principle that we are a nation of opportunity. But over the last quarter century we have seen a disturbing “opportunity gap” emerge. We Americans have always believed that those who have talent and try hard will succeed, but this central tenet of the American Dream seems no longer true or at the least, much less true than it was.

In Our Kids, Robert Putnam offers a personal and authoritative look at this new American crisis, beginning with the example of his high school class of 1959 in Port Clinton, Ohio. The vast majority of those students went on to lives better than those of their parents. But their children and grandchildren have faced diminishing prospects. Putnam tells the tale of lessening opportunity through poignant life stories of rich, middle class, and poor kids from cities and suburbs across the country, brilliantly blended with the latest social-science research.

“A truly masterful volume” (Financial Times), Our Kids provides a disturbing account of the American dream that is “thoughtful and persuasive” (The Economist). Our Kids offers a rare combination of individual testimony and rigorous evidence: “No one can finish this book and feel complacent about equal opportunity” (The New York Times Book Review).

“There are just a few essential reads if you want to understand the American social and political landscape today. Robert Putnam’s Our Kids . . . deserve[s] to be on that list.”
— David Brooks

Robert D. Putnam is the Malkin Research Professor of Public Policy at Harvard University and a former Dean of the John F. Kennedy School of Government. Nationally honored as a leading humanist and a renowned scientist, he has written fourteen books, including the bestselling Our Kids and Bowling Alone, and has consulted for the last four US Presidents. In 2012, President Obama awarded him the National Humanities Medal, the nation’s highest honor for contributions to the humanities. His research program, the Saguaro Seminar, is dedicated to fostering civic engagement in America. Visit RobertDPutnam.com.
Loading...
or support indie stores by buying on