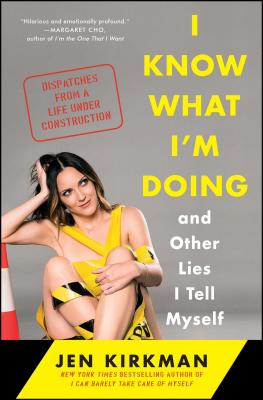 I Know What I'm Doing -- and Other Lies I Tell Myself

Dispatches from a Life Under Construction

Jen Kirkman wants to be the voice in your head that says, Hey, you’re okay. Even if you sometimes think you aren’t! And especially if other people try to tell you you’re not.

In I Know What I’m Doing—and Other Lies I Tell Myself, Jen offers up all the gory details of a life permanently in progress. She reassures you that it’s okay to not have life completely figured out, even when you reach middle age (and find your first gray pubic hair!). She talks about making unusual or unpopular life decisions (such as cultivating a “friend with benefits” or not going home for the holidays) because you don’t necessarily want for yourself what everyone else seems to think you should. It’s about renting when everyone says you should own, dating around when everyone thinks you should settle down, and traveling alone when everyone pities you for going to Paris without a man.

From marriage to divorce and sex to mental health, I Know What I’m Doing—and Other Lies I Tell Myself is about embracing the fact that life is a bit of a sh*t show and it’s definitely more than okay to stay true to yourself.

Praise For I Know What I'm Doing -- and Other Lies I Tell Myself: Dispatches from a Life Under Construction…

“[Kirkman’s] act has the feel of that wonderful moment at the end of a party when you are left alone to gossip with your best friend about the horrible and ridiculous things that just went on. Both on social media and onstage, however, Ms. Kirkman comes across as a happy warrior, a polemicist unafraid to show her silly side… Her jokes argue for the fun of being single, but it’s the way she tells them that prove it.”
-- Jason Zinoman, The New York Times, on Kirkman's Netflix special, I'm Gonna Die Alone

"This book is full of hilarious, candid, and sometimes gut-wrenching stories. There wasn't a single moment that I wasn't completely invested in what happened next. She peels back the curtain and reveals every emotion we all have to go through in life, but with such grace that you almost want to apologize for laughing so much—until you realize that's exactly what she wants you to do."
-- Sarah Colonna, bestselling author of Life As I Blow It and Has Anyone Seen My Pants?

“Often when I read a book, I nod because I can relate. But when Jen Kirkman, shares her stories, I can relate AND feel empowered.”
-- Lizz Winstead, co-creator of The Daily Show

“Jen Kirkman is a pragmatist. Let her help you clear your head—‘ease in’ rather than ‘lean in.’ Life is too short not to listen to her—and she’s right about everything, except the Congressional ban on pennies.”
-- Janeane Garofalo, author of Feel this Book

“Jen has a unique and essential point of view in comedy. This book is hilarious and emotionally profound. Simply magnificent.”
-- Margaret Cho, author of I'm the One That I Want

“This sharply witty memoir from the comic insightfully examines divorce and dating. A-.”
-- InTouch Weekly

Jen Kirkman is a world-touring stand-up comedian and the author of the New York Times bestseller I Can Barely Take Care of Myself: Tales of a Happy Life Without Kids and I Know What I’m Doing—And Other Lies I Tell Myself: Dispatches from a Life Under Construction. Her Netflix original comedy special I'm Gonna Die Alone and I Feel Fine streams worldwide, and she has released two comedy albums, Self Help and Hail to the Freaks (which hit #13 on the Billboard charts). She was a longtime writer and panelist on the E! Network’s Chelsea Lately and the narrator of many episodes in the award-winning TV show Drunk History on Comedy Central.
Loading...
or
Not Currently Available for Direct Purchase