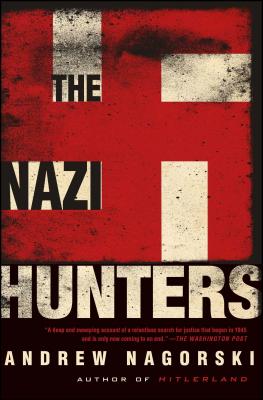 More than seven decades after the end of the Second World War, the era of the Nazi Hunters is drawing to a close. Their saga is finally told in this “deep and sweeping account of a relentless search for justice that began in 1945 and is only now coming to an end” (The Washington Post).

After the Nuremberg trials and the start of the Cold War, most of the victors in World War II lost interest in prosecuting Nazi war criminals. “Absorbing” (Kirkus Reviews) and “fascinating” (Library Journal), The Nazi Hunters focuses on the men and women who refused to allow their crimes to be forgotten.

The Nazi Hunters reveals the experiences of the young American prosecutors in the Nuremberg and Dachau trials, Benjamin Ferencz and William Denson; the Polish investigating judge Jan Sehn, who handled the case of Auschwitz commandant Rudolf Höss; the Mossad agent Rafi Eitan, who was in charge of the Israeli team that nabbed Eichmann; and Eli Rosenbaum, who sought to expel war criminals who were living in the United States. But some of the Nazi hunters’ most controversial actions involved the more ambiguous cases, such as former UN Secretary-General Kurt Waldheim’s attempt to cover up his wartime history. Or the fate of concentration camp guards who have lived into their nineties, long past the time when reliable eyewitnesses could be found to pinpoint their exact roles.

The story of the Nazi hunters is coming to a natural end. It was unprecedented in so many ways, especially the degree to which the initial impulse of revenge was transformed into a struggle for justice. The Nazi hunters have transformed our fundamental notions of right and wrong, and Andrew Nagorski’s “vivid, reader-friendly account of how justice was done…is comprehensively informative and a highly involving read” (The Wall Street Journal).

Praise For The Nazi Hunters…

"Nagorski is a veteran author and foreign correspondent whose Hitlerland: American Eyewitnesses to the Nazi Rise to Power is the alpha to the omega of The Nazi Hunters. . . . [a] deep and sweeping account of a relentless search for justice that began in 1945 and is only now coming to an end.”
— The Washington Post

“An epic tale . . . the book's main actors are painted with a complex but unsparing clarity."
— Christian Science Monitor

"A reminder of the fact that the Nazi trials of the last 70 years were never a foregone conclusion."
— TIME

“A history that reads like an adventure story."
— Florida Times Union

“Far more intriguing than any Hollywood production. The proofs highlight every page of Andrew Nagorski’s The Nazi Hunters, a new study of the evildoers and how they were pursued. . . . [Nagorski] has a discerning eye and a gift for the revealing anecdote.”
— City Journal

The Nazi hunters, like their prey, are passing away. As Nagorski points out, that “is why their stories can and should be told now.” His book captures their work in vivid and detailed prose. For journalists, it provides the added enjoyment of reading about other people’s investigative tricks and tools. The Nazi Hunters stands as both a tribute to, and a record, of a unique handful of people who devoted their lives to justice.
— Overseas Press Club

"A comprehensive treatment of the dogged men and women whose heroic efforts restored a measure of justice to millions of murdered souls."
— The Weekly Standard

“The author provides fascinating insight into those who continued to pursue war criminals after the spotlight had faded.”
— Library Journal

“In a world that is, alas, awash in crimes against humanity, we have an urgent need to address these complex and controversial questions."
— Jerusalem Post

“Andrew Nagorski’s The Nazi Hunters comes at a significant point, at the juncture between living memory and the historical record… His account is highly objective and balanced… It’s a narrative that will hold you, even if you’ve followed this story over the decades.”
— The Dallas Morning News

“A detailed look at the grim work of tracking Nazis over the decades since World War II. . . . absorbing.”
— Kirkus Reviews

“An admirably accessible and intimate narrative. . . . [Nagorski] reveals the differences in tactics, politics and personalities that have led to feuds among the Nazi hunters themselves. . . . for all their rivalries and failings, the Nazi hunters are saluted by Nagorski for their accomplishments: not just in helping to prosecute the most egregious of the perpetrators, but also in etching the details of Nazi crimes — beyond doubt or dispute — in the historical record.”
— The Forward

“Andrew Nagorski has produced an important work—a well-written and revealing book about the darkest acts of World War II.”
— Alan Furst, author of Spies of Warsaw and Kingdom of Shadows

“The world failed the victims not only during the Holocaust but afterwards, as perpetrators were allowed to go on with their lives. A few determined Nazi hunters tried to bring justice. This is their story. It must be read.”
— Alan Dershowitz, author of Abraham: The World's First (but certainly not last) Jewish Lawyer

“Andrew Nagorski spins a gripping, historically urgent narrative in The Nazi Hunters. He demonstrates that how we deal with the most evil perpetrators among us, is as much about who we are as it is about the criminals. The Nazi Hunters is really about the present: are we willing to do the consuming and often thankless work of holding criminals from the Balkans to the Middle East and Africa accountable for unspeakable acts? This could not be a more timely reminder of the world's moral responsibility toward perpetrators of war crimes.”
— Kati Marton, author of The Great Escape and Enemies of the People

“A fascinating collective portrait of a variety of Nazi hunters. Some, Simon Wiesenthal and the Klarsfelds, are well known. But the most fascinating aspect of the book is Nagorski’s portrayal of less well-known figures: the Polish judge Jan Sehn, who first investigated the Nazi death camps; the German prosecutor, Fritz Bauer, who instigated both the capture of Eichmann and the Frankfurt Auschwitz trial; and William Denson, who convicted hundreds of the most notorious concentration camp guards.”
— Christopher Browning, author of Ordinary Men and The Origins of the Final Solution

“A war continued after World War II to bring its mass murderers to justice. Andrew Nagorski tells the story of the dogged search by some for the killers as well as the accommodations made by others to let this sordid chapter of history remain buried. Meticulously researched, superbly written, The Nazi Hunters is fascinating—disturbing, to be sure—but fascinating.”
— Douglas Waller, author of Disciples and Wild Bill Donovan

“Andrew Nagorski, author of the mesmerizing Hitlerland, has made a definitive and invaluable contribution to the historical record with his outstanding successor work, The Nazi Hunters. Integrating the diffuse strands of a great decades long drama before a vanishing window of history has closed, the author has crafted the fascinating and emotionally galvanizing narrative of the hunt for notorious Nazi fugitives ranging from Adolf Eichmann and Josef Mengele to the SS officers and concentration camp commandants who fled from the ashes of Germany's defeat in World War II. Not only an investigative and intelligence page-turner, The Nazi Hunters tells the story of an epic and global quest for justice rather than revenge.”
— Gordon M. Goldstein, adjunct Senior Fellow, Council on Foreign Relations and author of Lessons In Disaster: McGeorge Bundy and the Path to War in Vietnam

“The last former Nazis are dying out, and so, too, are those whose life’s work was to hunt them down. Nagorski tells their stories evenhandedly, uncovering a fascinating cast of characters from all over the world and placing their efforts in a broader perspective.”
— Foreign Affairs

"The Nazi Hunters is, variously, horrifying, informative, exciting and enlightening, but it must be read in small doses for there is so much in it to grasp."
— Providence Journal

Andrew Nagorski served as Newsweek’s bureau chief in Hong Kong, Moscow, Rome, Bonn, Warsaw, and Berlin. He is the author of six previous critically acclaimed books, including Hitlerland and The Nazi Hunters. He has also written for countless publications. Visit him at AndrewNagorski.com.
Loading...
or support indie stores by buying on