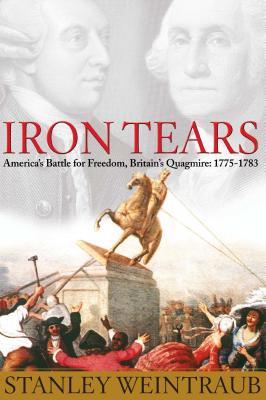 A startling new history of the Revolutionary War, told from the perspectives of both the colonists and the colonizers.

For generations, Americans have been taught to view the Revolutionary War as a heroic tale of resistance, exclusively from the perspective of the Continental army and the Founding Fathers. Now, in Iron Tears, master historian Stanley Weintraub offers the first account that examines the war from three divergent and distinct vantage points: the battlefields; the American leadership under George Washington; and—most originally—that of England, embroiled in controversy over the war.

Iron Tears renders an unprecedented account of the fight for American independence through British eyes, while dramatically narrating the battles that were waged across the Atlantic from Lexington to Yorktown and beyond. As the general, whom the British snobbishly and demeaningly referred to as “Mr. Washington,” rallied to keep his ragged and overmatched Continentals together and create a nation, “iron tears” fell from redcoat muskets and cannons, as well as from the demoralized eyes of the defeated British. Weintraub's multifaceted analysis will forever change and expand our view of the American Revolution.

Stanley Weintraub is Evan Pugh Professor Emeritus of Arts and Humanities at Penn State University and the author of notable histories and biographies including 11 Days in December, Silent Night: The Story of the World War I Christmas Truce, MacArthur's War, Long Day's Journey into War, and A Stillness Heard Round the World: The End of the Great War. He lives in Newark, Delaware.
Loading...
or support indie stores by buying on