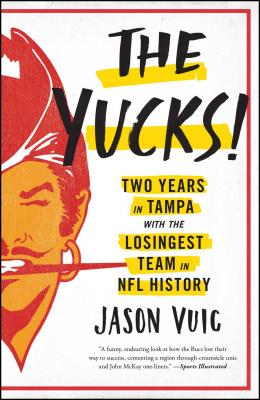 Two Years in Tampa with the Losingest Team in NFL History

Long before their first Super Bowl victory in 2003, the Tampa Bay Buccaneers did something no NFL team had ever done before and that none will ever likely do again: They lost twenty-six games in a row.

This was no ordinary streak. Along with their ridiculous mascot and uniforms, which were known as “the Creamsicles,” the Yucks were a national punch line and personnel purgatory. Owned by the miserly and bulbous-nosed Hugh Culverhouse, the team was the end of the line for Heisman Trophy winner and University of Florida hero Steve Spurrier, and a banishment for former Cowboy defensive end Pat Toomay after he wrote a tell-all book about his time on “America’s Team.” Many players on the Bucs had been out of football for years, and it wasn’t uncommon for them to have to introduce themselves in the huddle. They were coached by the ever-quotable college great John McKay. “We can’t win at home and we can’t win on the road,” he said. “What we need is a neutral site.”

But the Bucs were a part of something bigger, too. They were a gambit by promoters, journalists, and civic boosters to create a shared identity for a region that didn’t exist—Tampa Bay. Before the Yucks, “the Bay” was a body of water, and even the worst team in memory transformed Florida’s Gulf communities into a single region with a common cause. The Yucks is “a funny, endearing look at how the Bucs lost their way to success, cementing a region through creamsicle unis and John McKay one-liners” (Sports Illustrated).

Jason Vuic is the author of The Yucks: Two Years in Tampa with the Losingest Team in NFL History; The Yugo: The Rise and Fall of the Worst Car in History; and The Sarajevo Olympics: A History of the 1984 Winter Games. A lifelong Buccaneer fan with degrees from Wake Forest University, the University of Richmond, and Indiana University, he grew up in Punta Gorda, Florida, and now lives in Fort Worth, Texas.

Praise For The Yucks: Two Years in Tampa with the Losingest Team in NFL History…

“A funny, endearing look at how the Bucs lost their way to success, cementing a region through creamsicle unis and John McKay one-liners.” —Sports Illustrated

“The Yucks is a delightful merging of terrific writer, terrific subject, ugly-ass uniforms, and a gathering of gridiron ineptitude only a blind scout could love. Wonderfully done.”
—Jeff Pearlman, author of Boys Will Be Boys