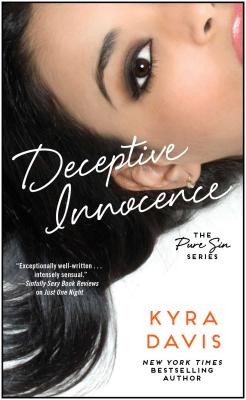 Kyra Davis, the New York Times bestselling author of Just One Night, returns with book one in the thrillingly sensual Pure Sin series featuring a beautiful young woman out for revenge—until she falls in love with the one man whose secrets are as dangerous as her own. (Note: this volume collects Parts 1 - 3 of the previously serialized Deceptive Innocence ebook series.)

Ever since Bell’s mother died while serving time for a murder she didn’t commit, Bell’s been focused on one thing: revenge. She knows her mother was set up by Jonathon Gable, the head of both the powerful Gable family and an international banking corporation. Now she’s determined to take him down—from the inside.

Bell needs access to the Gable home and offices, so she poses as a bartender to seduce her way into the bed—and life—of Jonathon’s rebellious youngest son, Lander. He’s not a typical Gable, spending more time in the dive bars of Harlem than the posh cocktail lounges of the Upper East Side. He has an attraction to danger, a vulnerability Bell isn’t shy about exploiting. It should be easy to uncover the secrets she needs to destroy his family and clear her mother’s name.

But it turns out Lander is much more complicated than she ever imagined. He’s enticing, intelligent, mysterious—plus their sexual chemistry is off the charts. Even though Bell knows he’s the enemy, she can’t help but be moved, both physically and emotionally, by the man she swore was just a target. When he finds out the truth she’s sure both their hearts and her plan will be crushed...until she begins to realize that Lander might be hiding his own secrets, darker than she ever imagined.

Kyra Davis is the New York Times bestselling author of Just One Night, “Just Once More”, Just One Lie, the Pure Sin series, the Sophie Katz mystery series, and the novel So Much for My Happy Ending. Now a full-time author and television writer, Kyra lives in the Los Angeles area with her husband, son, their leopard gecko, and their lovably quirky Labrador, Sophie Dogz. To learn more, visit KyraDavis.com or follow her on Twitter @_KyraDavis and Facebook.com/AuthorKyraDavis.
Loading...
or
Not Currently Available for Direct Purchase