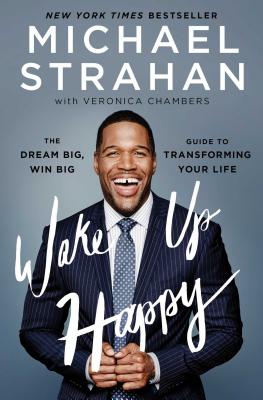 The Dream Big, Win Big Guide to Transforming Your Life

From the beloved cohost of Good Morning America, NFL Hall of Fame member and Super Bowl champion Michael Strahan comes a motivational guide to tackle each day from the moment you get out of bed.

Pulling from his own life experiences, Michael Strahan details the mix of mental discipline, positive thinking, and sense of play that lead him to a Super Bowl XLII victory as a member of the New York Giants, and later to star alongside Kelly Ripa in the hit daytime talk show Live! with Kelly and Michael. Each of these “Strahan Rules” will guide you step-by-step through developing a work ethic and mental durability that will prime you to achieve your goals and transform your life.

Delivered with his signature wit and wisdom, Strahan’s Rules combine a range of advice, from values he picked up from his father who served in the military to professors who teach on the science of happiness and include:

-Rule #5: Too many of us count ourselves out before we even give ourselves a chance...Do the work. Be excellent. You’ll find your place.
-Rule #11: You can’t change other people, but you can change how you are around them, and sometimes, a lot of times, that’s more than enough.
-Rule #12: Listen to other people, but don’t take their opinions for fact. Have your own experiences. Draw your own conclusions.

Whether you are attempting to achieve your career goals, seeking to better your relationships or simply up your optimism quotient, Wake Up Happy will inspire you.

NFL legend Michael Strahan made his name on the football field, setting the record for single season sacks in 2001 and being inducted into Pro Football Hall of Fame in 2014, but his star has shined brighter and for longer than his 216 history-making games with the New York Giants, which included a win at Super Bowl XLII. In 2008, he joined the Fox NFL Sunday pregame show as a commentator, and in 2012, he beat a competitive roster of candidates to replace Regis Philbin as co-host of the wildly popular Live! with Kelly & Michael. In April 2014, he joined Good Morning America as a special cohost, and Barbara Walters selected him as one of her 10 Most Fascinating People of 2014.

Veronica Chambers was an editor for The New York Times Magazine, a culture writer for Newsweek, and a senior associate editor at Premiere magazine. Her work has appeared in Vogue and Glamour, among many other publications. She is also the author of a critically acclaimed memoir, Mama's Girl. In 2000 she received a fellowship from the Japan Society to spend several months researching in Japan. She fell in love with the country and has returned for extended stays every year since.
Loading...
or support indie stores by buying on