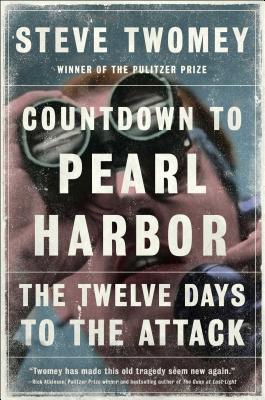 A fascinating look at the twelve days leading up to the Japanese attack on Pearl Harbor—the warnings, clues and missteps—by a Pulitzer Prize–winning reporter.

In Washington, DC, in late November 1941, admirals compose the most ominous message in Navy history to warn Hawaii of possible danger, but they write it too vaguely. They think precautions are being taken, but never check to see if they are. A key intelligence officer wants more warnings sent, but he is on the losing end of a bureaucratic battle and can’t get the message out. American sleuths have pierced Japan’s most vital diplomatic code, and Washington believes it has a window on the enemy’s soul—but it does not.

In a small office at Pearl Harbor, overlooking the battleships at the heart of America’s seafaring power, the Commander of the Pacific Fleet tries to figure out how much danger he really faces. His intelligence unit has lost track of Japan’s biggest aircraft carriers, but assumes they are resting in a port far away. The admiral thinks Pearl is too shallow for torpedoes, so he never puts up a barrier. As he frets, a Japanese spy is counting the warships in the harbor and reporting to Tokyo.

There were false assumptions, and racist ones: The Japanese aren’t very good aviators and they don’t have the nerve or the skill to attempt a strike so far from their home. There were misunderstandings, conflicting desires, painful choices. And there was a naval officer who, on his very first mission as captain of his very first ship, did exactly the right thing. His warning could have averted disaster, but his superiors reacted too leisurely. Japanese planes arrived moments later.

Twomey’s telescoping of the twelve days leading to the attack unravels the crucial characters and moments, and produces an edge-of-your seat drama with fascinating details about America at this moment in its history. By the end, the reader understands how assumption is the root of disaster, and how sometimes a gamble pays off.

“Splendid.... Even though readers already know the ending, they’ll hold their collective breath, as if they’re watching a rerun of an Alfred Hitchcock classic.”

“A riveting narrative of the American misjudgments and mistakes that contributed to a day rivaled in U.S. history only by Sept. 11, 2001. It’s not revisionist history so much as a poignant retelling of a familiar story.”

“Exhaustive and unflinching.... [Twomey] has put together the pieces of the bewildering puzzle and written a riveting account of a catastrophe that never should have happened.”

“A well-written and engaging account that reinserts human dynamism into a history too often reduced to abstract binaries.”

“Brings to life the many disparate personalities, hidebound traditions, racism and simple human error that led to the US being caught flat-footed on December 7, 1941.... Illuminating.”

“Twomey’s highly recommended exploration of the miscommunications and racist assumptions of the U.S. military sheds light on the missteps of military leadership and provides much-needed context for why the American fleet was unprepared for Japan’s devastating raid.”

“Pulitzer Prize-winning journalist Steve Twomey uses his impressive research and storytelling skills to recreate the dozen days leading up to the attack on Pearl Harbor on December 7, 1941....Twomey creates a dramatic, page-turning narrative that feels both fresh and suspenseful.... Countdown to Pearl Harbor offers a new and fascinating look at one of the defining events in U.S. history.”

“Twomey presents more than enough researched facts to show what we might call today a failure of intelligence, or government coordination, or preparedness. What he gives us – a look at pre-WWII society, the outlines of spy craft and code-breaking – is exciting.”

“A well-researched study of an infamous moment that is still fascinating and controversial.”

“Twomey avoids rehashing history by detailing things that the public may not have known, including the information government had and the general views of Americans towards the Japanese that may have led to such devastation.”

“A fine account of the players and events in the years leading up to the Japanese attack on Pearl Harbor.... The story of Pearl Harbor has been done to death, but Twomey’s vivid work rates high nonetheless.”

Steve Twomey began his career in journalism as a copyboy at the Chicago Tribune when he was in high school. After graduating from Northwestern University, he began a fourteen-year career at The Philadelphia Inquirer, during which he won the Pulitzer Prize for feature writing, and then worked at The Washington Post for the next thirteen years. More recently, he has written for Smithsonian and other magazines and has taught narrative writing at the graduate schools of New York University and the City University of New York. The ghostwriter of What I Learned When I Almost Died and author of Countdown to Pearl Harbor, Twomey lives in Montclair, New Jersey, with his wife, Kathleen Carroll. They have an adult son, Nick.
Loading...
or
Not Currently Available for Direct Purchase