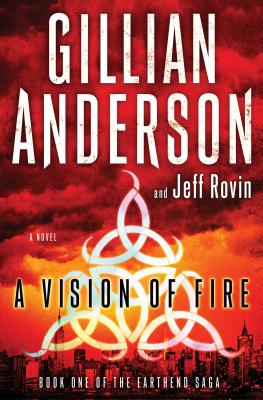 A Vision of Fire

Book 1 of The EarthEnd Saga

Renowned child psychologist Caitlin O’Hara is a single mom trying to juggle her job, her son, and a lackluster dating life. Her world is suddenly upturned when Maanik, the daughter of India’s ambassador to the United Nations, starts speaking in tongues and having violent visions. Caitlin is sure that her fits have something to do with the recent assassination attempt on her father—a shooting that has escalated nuclear tensions between India and Pakistan to dangerous levels—but when teenagers around the world start having similar outbursts, Caitlin begins to think that there’s a more sinister force at work.

In Haiti, a student claws at her throat, drowning on dry land. In Iran, a boy suddenly and inexplicably sets himself on fire. Animals, too, are acting irrationally, from rats in New York City to birds in South America to ordinary house pets. With Asia on the cusp of nuclear war, Caitlin must race across the globe to uncover the mystical links among these seemingly unrelated incidents in order to save her patient—and perhaps the world.

Praise For A Vision of Fire: Book 1 of The EarthEnd Saga…

"Actress Anderson of X-Files fame makes her fiction debut with this gripping, well-written thriller, coauthored with genre veteran Rovin (Vespers).... Fans of Douglas Preston and Lincoln Child will find a lot to like."

"Famed as X-Files Special Agent Dana Scully, Emmy and Golden Globe Award winner Anderson helps launch the publisher's cutting-edge imprint Simon 451 with the transcendent story of a Manhattan psychiatrist investigating inexplicable behavior by children worldwide that could spell real trouble.... A lot of tension…the mystical elements are further out there than any X-Files episode."

"Anderson and co-author Jeff Rovin, an established novelist and ghostwriter, have crafted a book that takes a measured approach to the supernatural and wears its sombre apocalyptic mood like a stylish cashmere overcoat."

"[A] slick, fast-paced page-turner replete with nuclear threat, occult cabals and an epidemic of apocalyptic visions suffered by children worldwide."

Gillian Anderson is an award-winning film, television, and theater actor and producer, writer, and activist. She currently lives in London with her daughter and two sons.