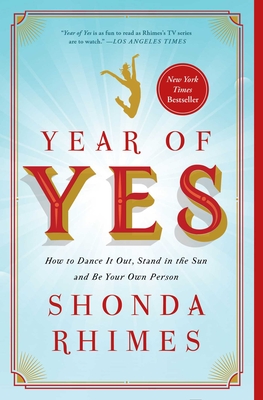 How to Dance It Out, Stand In the Sun and Be Your Own Person

The instant New York Times bestseller from the creator of Grey’s Anatomy and Scandal and executive producer of How to Get Away with Murder shares how saying YES changed her life. “As fun to read as Rhimes’s TV series are to watch” (Los Angeles Times).

She’s the creator and producer of some of the most groundbreaking and audacious shows on television today. Her iconic characters live boldly and speak their minds. So who would suspect that Shonda Rhimes is an introvert? That she hired a publicist so she could avoid public appearances? That she suffered panic attacks before media interviews?

With three children at home and three hit television shows, it was easy for Shonda to say she was simply too busy. But in truth, she was also afraid. And then, over Thanksgiving dinner, her sister muttered something that was both a wake up and a call to arms: You never say yes to anything. Shonda knew she had to embrace the challenge: for one year, she would say YES to everything that scared her.

This poignant, intimate, and hilarious memoir explores Shonda’s life before her Year of Yes—from her nerdy, book-loving childhood to her devotion to creating television characters who reflected the world she saw around her. The book chronicles her life after her Year of Yes had begun—when Shonda forced herself out of the house and onto the stage; when she learned to explore, empower, applaud, and love her truest self. Yes.

“Honest, raw, and revelatory” (The Washington Post), this wildly candid and compulsively readable book reveals how the mega talented Shonda Rhimes finally achieved badassery worthy of a Shondaland character. Best of all, she “can help motivate even the most determined homebody to get out and try something new” (Chicago Tribune).

Praise For Year of Yes: How to Dance It Out, Stand In the Sun and Be Your Own Person…

“Rhimes is, unsurprisingly, a fantastic memoirist: Her writing is conversational and witty and lyrical, inflected with the supple human breathiness you might expect from a person who spends her days writing dialogue. It features lots of great punchlines…It features occasional, chatty, second-person asides…[It] is also in many ways a side-door self-help book…[with] pieces of advice that concern not just Rhimes’s readers, but everyone. …Year of Yes is a book about the shifts taking place in Hollywood right now,and in the world right now, in the guise of a friendly memoir. It is, like Shondaland itself, making a statement. It is insisting that it is time for the people who used to be invisible to come forward and be seen.”
—Atlantic.com

“There’s real value in the experiences Rhimes shares… When, for example, she discusses learning to take better care of herself, the memoir feels honest, raw and revelatory.”
— The Washington Post

“A sincere and inspiring account of saying yes to life…Rhimes tells us all about it in the speedy, smart style of her much-loved TV shows. She's warm, eminently relatable, and funny… Like a cashmere shawl you pack just in case, Year of Yes is well worth the purse space, and it would make an equally great gift. Rhimes said "yes" to sharing her insights . Following her may not land you on the cover of a magazine, but you'll be glad you did.”
—Kirkus

“If you enjoy the rapid-fire dialogue of her characters, reading this book will feel like home. Rhimes opens up, and inspires, discussing her personal experiences as a sister, daughter, mother, friend and boss tempered with biting insights on societal expectations of women…[a] blend of biography and badassery.”
— Ebony.com

“Rhimes guides the reader through her transformative yearlong experiment, each chapter dealing with a different personal challenge for herself, and she lets us deep inside her brain, carefully laying out all of her fears and self-doubt…candid and friendly, almost as if the two of you were catching up over drinks.”
— Slate.com

“A mix of humor and conversational real talk…written with dashes of Oprah-esque inspiration but the no-B.S. frankness of, say, Dr. Cristina Yang from Grey's Anatomy…Even if Rhimes's fame and career don't make her an everywoman, she writes with an everywomanly sensibility…her words brim with such life that by the end of the book, some readers may find themselves wanting to say yes to more things, too.”
—TVInsider.com

“Small, charmingly odd, inspirational stories…Quite simply, it's a book about how she learned to take care of herself, and how you might be able to as well. Welcome your new life coach, Shonda Rhimes.”
— Vulture

“A self-help book dressed in casual clothes, lessons for living a better life told through relatable personal essays from the woman who set out to, in the course of a year, make her own better… There’s an uncanny familiarity to the journey Rhimes goes on… Never do you feel preached at while reading Rhimes’s book. This woman of huge fame and fortune is speaking directly to you, and she’s doing it with familiarity, humor, and earned wisdom…Year of Yes is an awakening as much as it is a reckoning. Recognize the power of what you’ve been doing. Do more of it.”
— Daily Beast

"It’s like having a mini-Shonda in your head, encouraging you to go for it. And say ‘it’s handled.’"
— The Skimm (Skimm Reads pick)

“Shamelessly entertaining…an antic, funny and surprisingly funky portrait of what it’s like to be one of the most fascinating forces in contemporary network television.”
— Buffalo News (Editor's Choice Review)

“This memoir/call to arms from the one-woman force behind Grey’s Anatomy, Scandal, and How to Get Away With Murder is basically a New Year’s resolution between two covers. Wherever you’re going, bring it with you.”
— Bloomberg Businessweek

“Amazing…The title alone is giving us heart eyes… Life is full of opportunities and chances that we’ve can’t even imagine. That’s the core message of empowerment in Shonda’s new book, and we’re behind it one-hundred percent. ALL OF THE YES to Year of Yes.”
—HelloGiggles

“Instead of writing passionate narratives for her TV characters, Rhimes adopted their pluck and bold attitudes and attacked life with a new sense of purpose…Who knew that such a small word could have such a life-changing impact? By saying “yes,” she learned to dance it out and stand in the sun. Dr. Cristina Yang would be soproud.”
—Associated Press

“Year of Yes is as fun to read as Rhimes' TV series are to watch. Her authorial voice is fresh and strong."
—Los Angeles Times

“Can help motivate even the most determined homebody to get out and try something new in the New Year.”
—Chicago Tribune

“A book that is fun, dishy and inspirational all at the same time…a powerful book, a great gift for a friend or yourself, whether you’re a fan of the Shondaland lineup or not.”
—Motherlode/NYTimes.com

“Brilliant…a peek into Rhimes' wise, funny, surprisingly candid brain, which contains opinions on everything from accepting compliments and balancing showrunning with single motherhood to, yes, the recent weight loss that's been (unfairly) making the most headlines. By the end of journey in The Year of Yes, you'll feel like you've gained a new best friend.”
—Women & Hollywood/ Indiewire.com

“You’ll want to standup and cheer when she takes control, remakes her life, and learns to loveherself.”
—Buzzfeed.com

Shonda Rhimes is CEO of the global media company Shondaland.  With a focus on innovation, Rhimes’s company approaches storytelling through brand partnerships, merchandise, and content for film, streaming, audio, digital, and editorial. In her career, Rhimes’s work has been celebrated with numerous awards including induction into the Television Academy Hall of Fame. She has shifted the entertainment industry’s business model and changed the face of television.
Loading...
or support indie stores by buying on