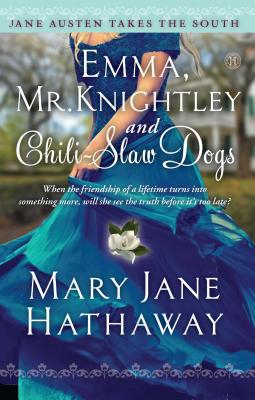 From the bestselling author of Pride, Prejudice, and Cheese Grits comes a new and comical contemporary take on the perennial Jane Austen classic, Emma.

Caroline Ashley is a journalist on the rise at The Washington Post until the sudden death of her father brings her back to Thorny Hollow to care for her mentally fragile mother and their aging antebellum home. The only respite from the eternal rotation of bridge club meetings and garden parties is her longtime friend, Brooks Elliott. A professor of journalism, Brooks is the voice of sanity and reason in the land of pink lemonade and triple layer coconut cakes. But when she meets a fascinating, charismatic young man on the cusp of a brand new industry, she ignores Brooks’s misgivings and throws herself into the project.

Brooks struggles to reconcile his parents’ very bitter marriage with his father’s devastating grief at the recent loss of his wife. Caroline is the only bright spot in the emotional wreckage of his family life. She’s a friend and he’s perfectly happy to keep her safely in that category. Marriage isn’t for men like Brooks and they both know it… until a handsome newcomer wins her heart. Brooks discovers Caroline is much more than a friend, and always has been, but is it too late to win her back?

Featuring a colorful cast of southern belles, Civil War re-enactors, and good Christian women with spunk to spare, Emma, Mr. Knightley, and Chili-Slaw Dogs brings the modern American South to light in a way only a contemporary Jane Austen could have imagined.

Mary Jane Hathaway is the pen name of an inspirational fiction writer. She homeschools her six children and lives in the small town of Milton-Freewater, Oregon.

Jane Austen and Southern romance fans alike will enjoy this sweet echo of the Regency classic. The story is adorably funny in its Shakespearean comedy of errors as Caroline and Brooks continually misunderstand each other and their romantic feelings…Their first kiss is well worth waiting for—for readers as much as the made-for-each-other couple.

“I loved watching them slowly fall in love and rarely do I comment on such a thing, but the kiss in this book was awesome. I had to go back and read that thing again.”
or support indie stores by buying on
Copyright © 2020 American Booksellers Association