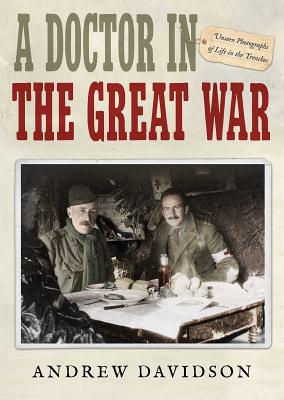 A Doctor in The Great War

Unseen Photographs of Life in the Trenches

Featuring 250 previously unknown photographs, this is the extraordinary true story of a young doctor whose photos left behind an astonishing firsthand account of life at the front of World War I.

As a twenty-five-year-old medical officer and one of the first doctors to win the Military Cross, Fred Davidson took countless photographs while he served in the trenches from 1914-1915. Though he took them illegally, more than 250 of the photographs shot by Davidson and his fellow officers survived and are now shared for the first time in this harrowing, eye-catching, and poignant narrative of the Great War.

In A Doctor in the Great War, author Andrew Davidson—the grandson of Fred—depicts the everyday lives of soldiers, both on and off duty: from the parade ground at Glasgow’s Maryhill to the brothels of Armentieres, from the band of brothers who dubbed themselves “Old Contemptibles” to the original folding Kodak and Ansco cameras they used. It is the story of the 1st Cameronians, who achieved notoriety for selling the Great War’s earliest front line photographs. And it is a deeply personal account of the pictures that have been passed down for three generations, describing the men who fought with Fred Davidson, the conditions they served in, the battles they saw, and the horrors they endured.

A must-have for history and photography enthusiasts alike, this glimpse of the War to End All Wars is an unusually intimate portrait that will engulf you in the lives of soldiers and leave you humbled and amazed.

Praise For A Doctor in The Great War: Unseen Photographs of Life in the Trenches…

"An intimate snapshot of history that puts the Great War firmly into focus."

"Remarkable... A deeply affecting account of men struggling to keep hold of their sanity amid a ceaseless round of daily horrors."

"A treasure trove of photographs offering a unique insight into the grim reality of life in the trenches."

"Using an inspired and original concept, [Andrew Davidson] blends 250 original photographs with a crisp, contemporary narrative to give us a new and amazingly intimate perspective on the danger, hardships and playful camaraderie of a dismal, deadly battlefront. If you only buy one book about the war, make it this one."

Andrew Davidson is an award-winning journalist and author of the Sunday Times business interview page from 2003 to 2012. His previous books include Bloodlines, an anatomy of daily life at St Thomas’ Hospital, and Smart Luck, an anthology of his interviews with well-known entrepreneurs.
Loading...
or
Not Currently Available for Direct Purchase