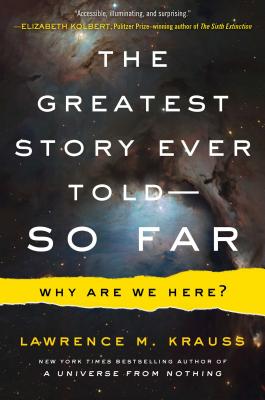 The Greatest Story Ever Told--So Far

Why Are We Here?

Internationally renowned, award-winning theoretical physicist, New York Times bestselling author of A Universe from Nothing, and passionate advocate for reason, Lawrence Krauss tells the dramatic story of the discovery of the hidden world of reality—a grand poetic vision of nature—and how we find our place within it.

In the beginning there was light.
But more than this, there was gravity.
After that, all hell broke loose…

In A Universe from Nothing, Krauss revealed how our entire universe could arise from nothing. Now, he reveals what that something—reality—is. And, reality is not what we think or sense—it’s weird, wild, and counterintuitive; it’s hidden beneath everyday experience; and its inner workings seem even stranger than the idea that something can come from nothing.

In a landmark, unprecedented work of scientific history, Krauss leads us to the furthest reaches of space and time, to scales so small they are invisible to microscopes, to the birth and rebirth of light, and into the natural forces that govern our existence. His unique blend of rigorous research and engaging storytelling invites us into the lives and minds of the remarkable, creative scientists who have helped to unravel the unexpected fabric of reality—with reason rather than superstition and dogma. Krauss has himself been an active participant in this effort, and he knows many of them well. The Greatest Story challenges us to re-envision ourselves and our place within the universe, as it appears that “God” does play dice with the universe. In the incisive style of his scintillating essays for The New Yorker, Krauss celebrates the greatest intellectual adventure ever undertaken—to understand why we are here in a universe where fact is stranger than fiction.

Praise For The Greatest Story Ever Told--So Far: Why Are We Here?…

“Krauss beautifully explains how our refusal to believe that there are unknowable cosmic truths has rewarded humanity with brilliantly precise answers to puzzles previously obscured by the fog of dogmatic assurance… The scope of this book is truly impressive."
— Science Magazine

"The Greatest Story Ever Told—So Far ranges from Galileo to the LHC and beyond. It's accessible, illuminating, and surprising—an ideal guide for anyone interested in understanding our accidental universe."
— Elizabeth Kolbert, Pulitzer Prize-winning author of The Sixth Extinction

"As Bard of the Universe, physicist Lawrence Krauss may be uniquely qualified to give us the Greatest Story Ever Told — a masterful blend of history, modern physics, and cosmic perspective that empowers the reader to not only embrace our understanding of the universe, but also revel in what remains to be discovered."
— Neil deGrasse Tyson, American Museum of Natural History

“College students, hippies, squares, christians, muslims, democrats, republicans, libertarians, theists, even atheists—all of us—sit around BS-ing like: 'So, how did all this, I mean everything, all of us, the whole universe, you know, man, everything, how did this all get here?' While we were doing that, Lawrence Krauss and people like him were doing the work to figure it out. Then Krauss wrote this great book about it. 'Wow, man, you mean, like we’re getting closer to really knowing? I guess we’ll have to back to talking about politics and sex.'”
— Penn Jillette, author of Presto!

"In the span of a century, physics progressed from skepticism that atoms were real to equations so precise we can predict properties of subatomic particles to the tenth decimal place. Lawrence Krauss rightly places this achievement among the greatest of all stories, and his book—at once engaging, poetic and scholarly—tells the story with a scientist’s penetrating insight and a writer’s masterly craft."
— Brian Greene, author of The Elegant Universe, and Director, Center for Theoretical Physics, Columbia University

"Unlike some very clever scientists, Lawrence Krauss is not content to bask on the Mount Olympus of modern physics.  A great educator as well as a great physicist, he wants to pull others up the rarefied heights to join him. But unlike some science educators, he doesn’t dumb down. In Einstein’s words, he makes it 'as simple as possible but no simpler.'"
— Richard Dawkins, author of The Magic of Reality

"A rich, definitely not-dumbed-down history of physics... An admirable complement to the author's previous book and equally satisfying for those willing to read carefully.”
— Kirkus

“This truly is the greatest story: how the universe arose, what it’s made of, how it works. Krauss is a warm and authoritative guide to what future generations will surely say is one of our species’ greatest accomplishments.”
— Steven Pinker, Johnstone Professor of Psychology, Harvard University, and author of The Language Instinct and The Blank Slate

"Discovering the bedrock nature of physical reality ranks as one of humanity's greatest collective achievements. This book gives a fine account of the main ideas and how they emerged. Krauss is himself close to the field, and can offer insights into the personalities who have led the key advances. A practiced and skilled writer, he succeeds in making the physics 'as simple as possible but no simpler.' I don't know a better book on this subject."
— Martin Rees, author of Just Six Numbers

"I loved the fight scenes and the sex scenes were excellent."
— Eric Idle, comedian

“In every debate I’ve done with theologians and religious believers their knock-out final argument always comes in the form of two questions: Why is there something rather than nothing? and Why are we here? The presumption is that if science provides no answers then there must be a God. But God or no, we still want answers. In A Universe From Nothing Lawrence Krauss, one of the biggest thinkers of our time, addressed the first question with verve, and in The Greatest Story Ever Told he tackles the second with elegance. Both volumes should be placed in hotel rooms across America, in the drawer next to the Gideon Bible."
— Michael Shermer, Publisher Skeptic magazine, columnist Scientific American, Presidential Fellow Chapman University, author The Moral Arc.

"It is an exhilarating experience to be led through this fascinating story, from Galileo to the Standard Model and the Higgs boson and beyond, with lucid detail and insight, illuminating vividly not only the achievements themselves but also the joy of creative thought and discovery, enriched with vignettes of the remarkable individuals who paved the way.  It amply demonstrates that the discovery that 'nature really follows the simple and elegant rules intuited by the 20th- and 21st-century versions of Plato’s philosophers' is one of the most astonishing achievements of the human intellect."
— Noam Chomsky, Institute Professor & Professor of Linguistics (Emeritus), MIT

"A Homeric tale of science, history, and philosophy revealing how we learned so much about the universe and its tiniest parts."
— Sheldon Glashow, Nobel Laureate, 1979 in physics

"Charming...  Krauss has written an account with sweep and verve that shows the full development of our ideas about the makeup of the world around us... A great romp."
— Walter Gilbert, Nobel Award, Chemistry, 1980

"In confident...prose, Krauss tells a story that both celebrates and explores science. Through it, he reminds readers why scientists build such complicated machinery and push the boundaries of the quantum world when nothing makes sense: “For no more practical reason than to celebrate and explore the beauty of nature.”"
— Publishers Weekly

"Although no true believer, Krauss launches with 'in the beginning there was light' but adds that gravity deserves equal billing before proceeding with a rich, definitely not-dumbed-down history of physics... An admirable complement to the author's previous book and equally satisfying for those willing to read carefully."
— Kirkus Reviews

"Reality is ‘weird, wild, and counterintuitive’ in this engaging scientific adventure from the author of A Universe from Nothing."

"The story of reality—or at least as we understand it—this book is a testament to perseverance, a riveting account of dogged scientific effort to comprehend the fundamental forces of nature. Krauss (director, Origins Project, Arizona State Univ.; Fear of Physics) has a knack for making complex concepts accessible to lay readers who are willing to put in time and energy… A must-read for anyone who enjoyed Krauss’s previous titles, especially A Universe from Nothing, and those interested in delving into the history of science."
— Library Journal (starred review)

Praise for A Universe From Nothing

“[An] excellent guide to cutting-edge physics… Detailed but lucid, thorough but not stodgy… Insightful… Space and time can indeed come from nothing; nothing, as Krauss explains beautifully... A great book: readable, informative and topical.”
— New Scientist

"Krauss possesses a rare talent for making the hardest ideas in astrophysics accessible to the layman, due in part to his sly humor... Krauss is genuinely in awe of the "wondrously strange" nature of our physical world, and his enthusiasm is infectious.”
— San Francisco Chronicle, Huffington Post, AP

Lawrence Krauss, a renowned theoretical physicist, is the president of The Origins Project Foundation and host of the Origins Podcast. He is the author of more than 300 scientific publications and nine books—including the bestselling The Physics of Star Trek—and the recipient of numerous international awards for his research and writing. Hailed by Scientific American as a “rare scientific public intellectual,” he is also a regular columnist for newspapers and magazines and appears frequently on radio and television.
Loading...
or
Not Currently Available for Direct Purchase