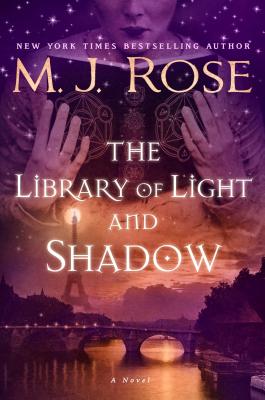 The Library of Light and Shadow

A Novel (The Daughters of La Lune #3)

“The novels of M.J. Rose are always rich in sensual detail, and her latest is no exception. Though the other senses are hardly neglected, in The Library of Light and Shadow the sense of vision is central to Delphine Duplessi, a young Frenchwoman who is a painter as well as a witch, and who sees both the surface of things and their hidden secrets. Thanks to the author's rich descriptions, readers, too, will see beyond their ordinary abilities, to the passion between Delphine and the man she loves but feels she must give up forever.”
— Pamela Grath, Dog Ear Books, Madison, GA
View the List

In this riveting and richly drawn novel from “one of the master storytellers of historical fiction” (New York Times bestselling author Beatriz Williams), a talented young artist flees New York for the South of France after one of her scandalous drawings reveals a dark secret—and triggers a terrible tragedy.

In the wake of a dark and brutal World War, the glitz and glamour of 1925 Manhattan shine like a beacon for the high society set, desperate to keep their gaze firmly fixed to the future. But Delphine Duplessi sees more than most. At a time in her career when she could easily be unknown and penniless, like so many of her classmates from L’École des Beaux Arts, in America she has gained notoriety for her stunning “shadow portraits” that frequently expose her subjects’ most scandalous secrets. Most nights Delphine doesn’t mind that her gift has become mere entertainment—a party trick—for the fashionable crowd.

Then, on a snowy night in February, in a penthouse high above Fifth Avenue, Delphine’s mystical talent leads to a tragedy between two brothers. Devastated and disconsolate, Delphine renounces her gift and returns to her old life in the south of France where Picasso, Matisse, and the Fitzgeralds are summering. There, Delphine is thrust into recapturing the past. First by her charismatic twin brother and business manager Sebastian who attempts to cajole her back to work and into co-dependence, then by the world famous opera singer Emma Calvé, who is obsessed with the writings of the fourteenth-century alchemist Nicolas Flamel. And finally by her ex-lover Mathieu, who is determined to lure her back into his arms, unaware of the danger that led Delphine to flee Paris for New York five years before.

Trapped in an ancient chateau where hidden knowledge lurks in the shadows, Delphine questions everything and everyone she loves the most—her art, her magick, her family, and Mathieu—in an effort to accept them as the gifts they are. Only there can she shed her fear of loving and living with her eyes wide open.

Praise For The Library of Light and Shadow: A Novel (The Daughters of La Lune #3)…

“The sophisticated and finely detailed narrative and exquisite storytelling draws readers into an esoteric post-World War I, art deco era. Yet it’s the compassionate and articulate narrator who brings this heartbreaking but hopeful story to life. Unforgettable.”
— Library Journal (starred review)

“Rose continues her mesmerizing Daughters of La Lune series with another title that captures the beauty, elegance, tragedy, and enchantment of Paris, this time during the 1920s, and explores magic, spiritualism, and the occult from a fascinating and creative angle. Possibly her best yet. A sensuous, sumptuous, and spellbinding novel.”
— Kirkus Reviews

"Passion and emotional artistry . . . transports the reader into the past better than a time machine could accomplish. A simple brushstroke or color invokes so many emotions that it is as if one is admiring a painting rather than devouring prose. The history mixed with the multilayers of the narrative will captivate readers."
— The Associated Press

New York Times bestselling author M.J. Rose grew up in New York City exploring the labyrinthine galleries of the Metropolitan Museum and the dark tunnels and lush gardens of Central Park. She is the author of more than a dozen novels, the founder of the first marketing company for authors, AuthorBuzz.com and cofounder of 1001DarkNights.com She lives in Connecticut. Visit her online at MJRose.com.
Loading...
or
Not Currently Available for Direct Purchase